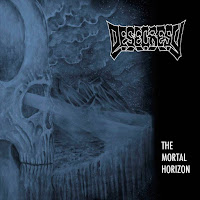 With five full-lengths since 2010, Desecresy has certainly proven to be one of the revitalizing forces in bringing ancient Finnish death metal back to the spotlight. Sure, their forebears like Convulsed and Demilich have still been touring, or putting out newer albums, but it's always cool to have some fresh new voices in the scene. Of course, by 'fresh', I mean a festering, guttural nightmare that sounds like it's been moldering away in some cavern alcove since that era in 1993-1995 when this country's death metal royalty was emerging onto the international market as an oblique, rotting overseas proxy to groups like Incantation, which were making strides in the sonic spelunking field here at home. Albums like Arches of Entropy and The Doom Skeptron were not among the most robust in their niche, their production values weren't quite on the level of Disma or Dead Congregation, but they were nonetheless charming for their commitment to subterranean creepiness and cover artwork which used simple dual-tone color schemes to create an almost demo look.

Those two albums and the subsequent Chasmic Transcendence were where my interest in the band reach its summit, whilst Stoic Death felt like more of the same, and to an extent so does The Mortal Horizon. The cover doesn't quite hold the same appeal to me, and neither does some of the music. Don't get me wrong, when Desecresy is working at that slow, drudging pace, gut rumbling chugs paired off against haunting or droning melodies, they certain relive a little of the magic of why I started listening to them in the first place, but when one really stops to dissect the rhythm guitars a little they all seem relatively bland or predictable and would have a hard time thriving without that higher pitched accompaniment. They've often had a very sincere, organic production on the drums, and that's very true of this album too, but I sensed that this often leeched away a little of the power that the music might otherwise hold...it seems such an inhuman, underworld sort of death metal that having beats that feel like they're playing next to you in a jam room on an off night countermands the potential atmosphere. The belly-busting bass grooves are quite good, as well as Tommi's growl, but you can tell a bit more here than on prior efforts that this is primarily one musician, and not all the instruments resonate equally through the recording.

In The Mortal Horizon's favor, it sets up these wonderful atmospheric intros to cuts like "Concealed Depths" or "Telekinetic Ignition", using guitars alone to invoke otherworldly escapism, but then once some of the full on heaviness arrives they often seem a little on the disappointing side. Also I felt that where the album sped up it became a little more bland, like some generic underdeveloped deathgrind. All that being said, I wouldn't consider this a bad album whatsoever when you add up its strengths, it's simply not that much of an interesting development over the prior releases. One could certainly still wrest some enjoyment out of this for those slogging, morbid melodic passages that populate a good percentage of the music, and it's loyal to its underground pedigree, but there have simply been a lot of similar efforts which bred more excitement and horror through their fleshy depths, and The Mortal Horizon's low end could have used some stronger support for its ghastly growls and ghostly melodies. Still solid, if my least favorite of the Desecresy outings so far.