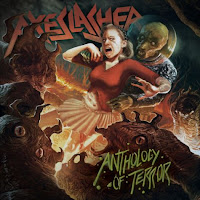 My love for 80s schlock cinema, horror, gore and being eternally locked within the mindset of a 13-year-old pretty much ensure that something like Axeslasher is going to catch my attention, and I mean that in the best possible way. While I don't always get a lot of the results I'd like from throwback-looking bands whose members are also obsessed with similar cult horror and exploitation kitsch, I have to applaud the efforts to revive the cheesy sentiments of that era. With their thrash terrorist ski masks, great sci-fi drive in cover art and track titles like "Mark of the Pizzagram" and "Invasion of the Babesnatchers", this was either going to be entirely awesome or another retro-clone pizza-thrash piece of trash that fails to elevate itself from its puddle of audio-genetic influences.

Anthology of Terror is somewhere between these two extremes, an EP that rounds up some of the Colorado group's previous singles into a nearly 20 minute exhibition of slightly party-tinged death thrash that by no means feels cheap or played out, even if its not super impressive. You can certainly hear some of those primitive 80s West Coast thrash influences, like Exodus-paced jerking rhythm guitars, but I'm also reminded a lot of death/thrash outfits like Ghoul, Exhumed, Cardiac Arrest, Frightmare and their like due to the mix of snarled and growled vocals and the way they can occasionally weave in some melodic intensity and frenzied leads. The rhythm guitars have a firm, abrasive tone to them which is very mosh-ready while providing a seat for the sicker, often sustained vocals. The rhythm section is adequate for the task, with a lot of fills being thrown around everywhere, especially the double kick variety, and that certainly gives Anthology a bit of modernity rather than feeling like a pure 80s retro idolization.

The downside here is that for all the considerable energy and propulsion Axeslasher metes out across these five tracks and intro, very few of the riffs are actually that catchy, and the songs don't burrow themselves into your head as much as the band's image, moniker and artwork might. Lyrically they have some fun topics like aliens conquering humanity and feeding them to their pets, supernatural serial killers, and witch-hunting, and the band is musically competent without any doubt, but I just didn't find the note choices or vocal lines here really resonating with me beyond a fleeting initial fun factor. I do like the style they go for, and a number of established acts with comparable sounds, so being that this material is already six years old or more, I wouldn't be surprised if they land some full-length record with a lot of improved songwriting chops some time soon. But this isn't quite there yet.