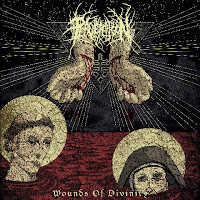 2019 has been such a great year in black metal so far that an album like Wounds of Divinity almost seems second tier in quality. And I say that because, while the Perverticon sophomore does little to distinguish itself from a good many other offerings in its genre, it's still a rather enjoyable effort that throws a few interesting riffing configurations at you that don't quite lineup with a million others you've heard, leaving you just enough slack on the line that you'll keep circling the bait until some other album comes along and catches you on its hooks. This is a slightly anonymous band with the handles 'Uncleanest Invictus', 'Necrosadistic Elite' and my favorite of the bunch, 'Omnicremationist Supreme', and from the degree of competence on exhibition here I'll just assume they've probably been involved with other Swedish black metal outfits in the past.

I say that also because the sound here is certainly one you could relate back to Dark Funeral, earlier Watain, Marduk and Lord Belial, one that relies heavily on incessant blasting rhythms and then using its guitar patterns to capitalize on that velocity with hypnotic weavings of tremolo pickings. The form isn't at its most savage and nasty here, although the drums are effortlessly fast, but there's a certain unique subtext within the chords and melodic single-picked notes that elated by tracks like "An Absence of All But Ashes" that really pay off with this approach. That's not to say that the band is all blast all the time, in fact they have a number of slower passages here to break up the flow of the record, but to be honest I found that the faster the notes and drums here, the more the material had my ears perking up. They do a lot of good work feeling out their chord choices so they can create this dramatic, eloquently evil momentum, which often reminds you of the old days of the 90s when you were first hearing stuff like Old Man's Child, Dissection or even Borknagar in a few cases. Not quite as eerily mood-inducing as other Swedish bands like Ondskapt or Armagedda, but I think fans of those might indeed get something out of this too.

A few downsides. The vocals, which are carnal enough of a rasp to match the riffs, but not all that distinctive from far more pain-wracked snarlers and growlers, don't exactly live up to the guitars. I could say the same for the drumming, it's fast as shit and does what it needs to, but in terms of throwing interesting beats and fills your way it's a bust, erring on the side of monotonous efficiency. The album does have a good bass tone though, loud and swerving along the guitars to give it an atmosphere across more dimensions than just the tinny blasts and the rhythm guitar tone. In a way, some of the deficiencies do let you focus in on those interesting riff patterns, so it's not all a bust, but the album does lack some punch and power if not speed. All told, though, this is yet another black metal record I've heard in these last four months which certainly doesn't disappoint, it's got enough moments of captivation that I think the potential of Perverticon is obvious.