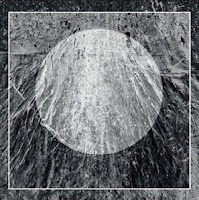 I was first exposed to Time Lurker just a couple years ago through their eponymous debut album, a fine entry into the field of black metal atmospherics and yet another band of quality populating the French landscape. Here they've teamed up with countrymen Cepheide, who I had not heard, but have a few prior recordings under their belt, presumably of a similar style and disposition judging by what I'm hearing on this disc. There are but three tracks here, Time Lurker offering up two and then their counterparts closing out the release with a 19+ minute opus, and apart from the obvious difference in length, and to some degree the production, the two pair up rather well aesthetically, performing vistas of blasted black metal that contrast against ambient segments.

And the ambient pieces rather win the day here, because in particular for the Time Lurker tunes, I didn't find the more aggressive passages quite as memorable as those on their debut. Spacious and savage surges with monotonous drums, smothered in sustained vocal snarls that fill the firmament of the recording, but rarely do they hit strings of notes that titillate until you get well into the piece, like past the five-minute mark of "No One is Real" before it slows its pace, or the middle of "Unstable Night" when the double-bass battery collides with some uneasy picking progression and bludgeons you fully in the chest while the howling and atmospheric guitars float above. Cepheide's title track, on the other hand, is a little shinier and more compelling, the way the vocals evoke these numbing chants and howls over the ebullient soundscape bursting off beneath them. The ambient segues in this tune also help defend it against the monotony a nearly 20 minute track might invoke, and they are quite immersive, the parts of the disc in which I sank the most; but otherwise I think the writing is very much in the same mold as the Time Lurker material.

If you're familiar with these groups or this general style of black metal in which atmosphere is conjured largely through sheer force, and the blasted regions of the tracks being used as a sort of transcendent hypnosis, then Lucide is nothing really to scoff at. I simply feel that the latter half of the run time is superior to the former, and overall the guitars could be written to be a little more memorable than half to play second fiddle to the windy momentum and esoteric tortured howling that doesn't stand out too boldly from the mix. Where the album hits its calms, like the intro to the first tune or sections of "Lucide", I felt myself most drawn to it, but once this ceded to the harsher parts, the material didn't really offer up a highly rewarding counterattack. Ultimately's its got a meditative feel to it on both ends of its heaviness, and it's not really intended to go for cheap hooks or melodies, but even then I didn't find the experience as evenly engrossing as it is stylistically consistent.