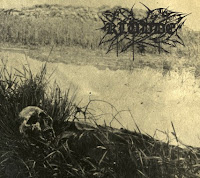 It's been a fair spell since the Kludde debut In den vergetelheid in 2008, but despite the many seasons the Belgian band has landed with a sophomore congruent with the sounds of the debut, a huge brick of black metal and sludge aesthetics with an even distribution across the album. When it comes to individual tracks, this doesn't always pan out in a 50/50 ratio, but the band is consistent when it smooths over the edges to make them fit. In fact, there's also a fraction of a death metal influence here, both in the vocals which feature more of a sustained hybrid of rasp and growl to their roar, and a few of the riff progressions which feed into or are fed by some of the album's grooves.

Now, if I were to favor one side of the band, it would probably be the faster, more black metal strain of riffing they create in tracks like "Schabouwelijke praktijken I - De rabauwen" or "Bloedkoesj", mildly engraved with melodies that help thunder it all forward. Once they go a little more mid-paced in that niche, the chord patterns become a little more predictable, and I find that also to be the case when they're laying out the sludgier sequences in tunes like "Schramoeille". That isn't to say that this is particularly weak material, it still hits you square in the gut thanks to the massive production values, and the other components like the vocals and lead guitars help flesh it out so it doesn't become too stagnant. In de kwelm is nothing if not forceful and consistent, while they might lack for some of the subtlety up front, they aren't really about that, but knocking you the hell over, which is exactly what this loud and potent mix will do, or what the material would do to you at a gig with Cerulean's massive growl digging your grave.

Some might actually find it too even of a beating, but thankfully Kludde mixes up the tempo and riffing throughout. For example, "Poesjkapelle" is like a punkier/crust piece that strikes just at the right time to brighten up the record, and the closer "De laatste reis" is a moody, murky doom piece that opens with tribal drumming, clean guitars and sparser electric riffs, before it gradually explodes and kicks you back into the bleachers. In de kwelm is a well-rounded, professional album that has no intention of boring its listeners, and could find itself a pretty broad audience between fans of crust and d-beat, harsher sludge, and the more rockin' black metal acts like Denmark's Horned Almighty. A little more nuance, originality to the chord choices, perhaps even a further integration of more dissonant, evil riff patterns, or extra instances of the atmospheric stuff which does occasionally appear, and this would drill itself into my memory a lot further. No question though that this is a step up from the debut, the decade between them been spent honing the chops.