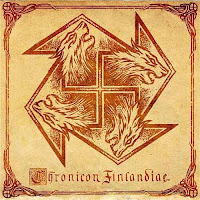 Folk metal records always make me nervous, as I've come across so many tacky and goofy examples in the genre that seem as if their entire exposure to the style is other tacky, goofy folk metal bands that they heard at a Renaissance Fair or from their LARPer friends. Predictable melodies, predictable instruments and metal ingredients that are reduced to boring chug rhythms, occasional leads and the tendency to clone the folksy melodies being played on the strings, horns or most often, the synthesizers. I'm not saying there won't be an occasional record of that type that hits it out of the park, sure, but so often it feels like bands are grasping to the notion of 'folk metal' than really digging their heads into the details of their own atavistic longings to create something really intriguing and not just a forgettable soundtrack for gallivanting about the dance-tent with a Pilsner.

Chronicon Finlandiae, the fourth record from Stormheit, may have a list of shortcomings attributed to it, but I can say that this isn't your average, shallow sort of folk metal effort. No, this is more like what would have happened had later era Bathory emerged from Finland instead of Sweden. This is laid back, airy, spacious mountainside rock which drifts at you with countless, tinny melodic guitar lines and some occasionally surges into a fraction more intensity with the drums picking up into a mid-paced beat. The drums sound as good as they need to, with some fills and grooves to help mediate the languid pacing of most of the tunes, and the bass lines, while nothing special, at least help to plug up some of the gaps left by the lack of a sturdy or voluminous rhythm guitar section in a lot of spots on the album. Acoustic guitars are spaced out across the album to give it more of a rustic charm, and keys are used liberally when further atmospheric escalation is required. Where they do break out some heavier riffs, like the picking progressions in the beginning of "Ukon Malja", they are actually pretty decent sounding, and I wished for a little more than this throughout.

On to the vocals...they are often a clear weakness here, as they possess a lot of those inherent flaws that you might remember Quorthon had, or some of Vintersorg's older solo stuff, only here it's another language and a different pitch. Once you accustom yourself to the more chanted phrasings, or the higher pitched, soaring inflections, or even the crowd shouted parts, they become quite pleasing, but it's when that layer of angst or harsher intonation is applied that they can become a little awkward, especially in the first track. The style should work on this really well, and in places it does, but I feel you have to go ever deeper into the record for them to really hit a confident stride. Almost all of the tracks are also quite substantial, from about 7-11 minutes in length, and while they aren't terribly boring in structure, a total playtime of 77 minute seems overwrought when the spectrum of actual ideas here might span about 50 minutes of worthwhile material. Don't get me wrong, the material doesn't suddenly take a nosedive in quality, it's just that you feel you've gotten it after about half the album and there aren't many surprised waiting deeper on.

I will say that Chronicon is on the verge of being a pretty solid album, turning out a lot better than I suspected after the first track. Tightening the tracks and improving the vocals would have gone a long way towards making a better impression, but if you're a real big pagan for Bathory albums like Twilight of the Gods, Hammerheart, Blood on Ice and the Northland two-parter, and want to hear a slightly different approach to that from across the Tornio River, this might be worth a listen.