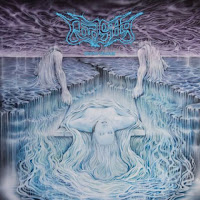 As interesting to the eye as Carrion of Time initially was, Ghastly's sophomore effort easily trumps it with that hypnotic cover art, using a rich color scheme I rarely encounter in this genre. Not to mention, Death Velour is a pretty classy title for a death metal record, a title that the album actually lives up to as a substantial evolution over its predecessor. Rather than approach their genre nostalgia like so many others in the field, treading down the expected paths of early Swede worship, cavernous claustrophobia, or even the nuances of their own Finnish forebears, Ghastly adopts its style into a more melodic, graceful presence which haunts while it soothes, chills while it comforts; an improvement over their more primitive debut in every category I can think of.

That isn't to say there aren't a few of those thundering, simplistic death metal grooves strewn about the rhythm guitar choices, but a large portion of the album is devoted to these melody or harmony driven sequences which are almost unanimously memorable, evoking a mournful sadness to the material which is loyal to how the album looks. By contrast, some of the tremolo picked throwback death metal riffs here sound even more evil by comparison, as in "Violence for the Hell of It". Due to this lighter, eerier, airier approach, the drums carry a lot more power, and even the bass lines thrive, since you can really hear them grooving off under both the heavier riffs and melodies. The vocals, while not changing up much from the style of the debut, have a little more potency and sustain to them which is a better fit for the often soaring, murkily majestic effect of the guitars. Other little atmospheric embellishments like clean guitars or the keys used in pieces like the intro further enhance its effects upon the listener as a bastion of Romanticized horror molded to death metal flesh.

Death Velour is certainly a throwback to an earlier age of the genre, when the melodies on records like North from Here or Tales from the Thousand Lakes were a new thing, but Ghastly handles them in its own way, wrenching the doom and gloom from the beauty of the guitars rather than from the constant drudgery of the band's bottom end. To that extent it feels quite unique in a crowded field where so many bands would rather foment the aggression and raw heaviness. This band has within a few years already evolved along the lines of groups like Tribulation, Morbus Chron, Horrendous, and their like, who used that late 80s death metal inspiration to lead them into new directions, rather than dwell too long in the past. The result is that this is by far one of the most promising bands on the Finnish scene right now, which does not lack for them, and I'm eager to see where they'll take this sound next, whether it's a more direct continuation of Death Velour or another sizeable ascension.