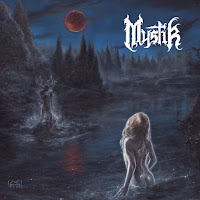 I've received a lot of pretty damn cool promos from I Hate records out of Sweden, but Mystik's eponymous debut blew me back about 30 years into the past when I was a pimply, awkward teen weaned heavily on traditional European speed and heavy metal. It doesn't sound a day more modern than, let's say 1986, and all for the better. Not to be confused with the recently revived band of the same name from Ohio, this is a Swedish group featuring Beatrice Karlsson and Lo Wickman on guitars, Julia von Krusenstjerna on the bass and vocals, and drummer Sven Nilsson, also of Antichrist, who we all know is one of my favorite bands in the world right now. They dial back the calendar several decades to create infectious, authentic tunes that sound like they could have come out through the Noise Records, Roadracer or Steamhammer imprints back in the mid-80s, and not simply thriving off of that sort of nostalgia but composing some genuinely catchy, timeless tracks.

The key here is the washed out, reverb-heavy sound that lends the guitars a load of atmosphere, especially through the melodies and leads, and Julia's vocals, which shift between a more evil, mid range and some higher pitched, but humble shouts that resonate out over the frenzied undercurrent, which I just love. Any excess polish is eschewed for sincerity, and that means even the little flaws to her intonations work as boons on this album. I'd compare them to the first two Warlock albums, in style, but the music running off beneath them is much faster in nature and so the effect is different. The short-lived US project Original Sin is perhaps a better parallel, since the riffing styles are a bit closer, although Mystik's stuff is a little more glorious and less mean sounding in spots. The rhythm guitars stay busy with a riff-set that will thrill metallic Germanophiles, I could hear little spikes of everything from Iron Angel to Running Wild here, especially in how the melodies are constantly being integrated over the chords, but you'll also here a little of the vintage Canadian speed metal sound in their circa Exciter or Razor, as well as Overkill's debut Feel the Fire.

It all adds up to something totally awesome, and while I could understand the argument that the tunes could grow a little samey as they often speed along at the same clip, I was hooked for the whole 37 minutes, and bits like the organ intro to "Lake of Necrosis" or the slower sections to the, self-titled track "Mystik" help to pace it all and balance it out. The bass-lines are corpulent enough to notice, the drums sound great, with a lot of thunder and crash to them that emphasizes how this album sounds like you're experience it outdoors, with traffic racing past you. The actual construction of the riffs is wholly traditional, but they're just the sorts of the progressions that never get old for me, especially when paired up with this production style. And that's probably where my own nostalgia does step in, since I'm a huge advocate for these older studio sounds; you can only punch in and polish something so much until it become sterile, so I really dig that the band not only chose to play in a fundamental style but to fully occupy that style with nearly every aspect of the recording.

Mystik is an extremely appealing debut, and if like myself, you cherish records like Branded and Exiled, Violence and Force, Burning the Witches, Hellish Crossfire, Executioner's Song, Vibrations of Doom and their like then I cannot recommend this one highly enough. If this came out back in 1985 I would still listen to it today with the same fervor, and where it doesn't really bring anything new to the table, it's another glaring example of how something which isn't broken doesn't need to be fixed.