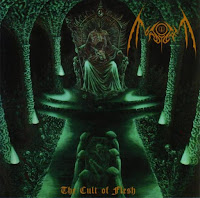 If there's one thing I'll never grow tired of, it has to be the classic death metal cover art which goes overboard to evoke a cryptic sense of horror and wonder. Japan's one-man act Morbid Art gets some points for the sarcophagus being carried prostrate towards headless undead Baphomet, cultists flanked by seas of spectral skeletons and columns of twisted phantoms, cone-shaped torches burning cold flames which illuminate the scene. Perhaps a typical sort of image to find on any remotely old-school fashioned album of this genre, but fuck it if I don't get drowned in nostalgia for that one time my Dungeons & Dragons character barely escaped such a scene with a few precious hit points and a tale to scare fellow adventurers at the next tavern stop. Also gotta mention that I dig the logo.

As for the music, it's sort of what you'd expect, but with a few unusual elements that prevent it from feeling all too familiar or predictable. This is, in truth, crushing old school death metal which draws heavily on the Swedish tradition in terms of guitar tone. Rough, raw, flesh-ripping chords bombard the listen in either drudging chord patterns or tremolo-picked accelerations akin to old Entombed. Quite a number of groovier break-downs sure to please pit-hards, but none as catchy as what you'd find on a record like Clandestine. The vocals feel like Consuming Impulse-era Pestilence, early Asphyx Van Drunen-isms or maybe a bit of countrymen Intestine Baalism, only there's a little less of the gruesome pitch-dynamics which made those memorable...Infernal Demolisher definitely goes for the more guttural end and his voice is tucked a bit too neatly beneath the harsher edge of the distortion. Once in awhile a Deicide-like snarl pops in alongside them, but overall they are not too distinct, pretty much standard for the style, a little monotonous but not much of a detriment.

The beats here are a bit too clean and programmed, but mixed just right so that their mechanistic feel never burdens the songs or takes you out of their cavernous, hostile mood. Bass guitars are hovering in there but again, really get lost up against those guitars or even the vocals. The little edge of what makes The Cult of Flesh not a complete photocopy of its influence are some of the weirder, almost happy or silly chord patterns that occasionally invade the riffs or an almost proggy little fill part, or some wailing harmonies embedded into a song like "Summon the God of Plague", so you can't always tell what's about the happen around any given corner of the disc. By and large, though, this is intestine-gouging death metal which heralds the earlier 90s, just not with the most memorable set of riffs or ideas put into its composition. If you're dying for more of that feel you got when you first heard Left Hand Path, Clandestine, Dark Recollections, and Symphony of Sickness, or if you dig similar Japanese acts like Baalism or Deadly Spawn, or Rogga Johansson's groups like Revolting or Paganizer, this album is far from a dud. But it's also not super inspiring or memorable beyond the look of the thing.