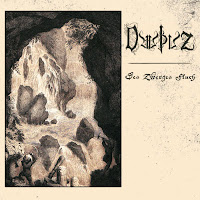 For a newer band, Dauþuz has kept itself very busy over the three years of its existence, dropping one new release annually, before most in the potential black metal market have heard any of them. But, damn it, for whatever limited audience pays attention to my ramblings, I aim to change that last bit, because they deliver on all counts to the traits I want out of well-rounded, fulfilling, effective underground black metal. Des Zwerges Fluch ('The Dwarf's Curse') is a less substantial offering than Die Grubenmähre, being an EP of around 35 minutes, but that's still quite a lot of bang for the buck, and it's a fluid continuation of the previous material which enacts a few tiny embellishments into its harsh and acoustic mining-scapes to easily justify its place on your shelf if you're into Medieval or antiquity-focused black metal escapism and not just looking for your next horn-throwing fix.

Certain of the tracks here, like "Unwerk - Des Zwerges Fluch I" and the 10-minute opening surge of "Steinhammer" are among my favorites in their whole catalog. The screams and growls have become even more crazy and intense, and the use of cleaner, chanted vocals has become more confident, they usually just follow a melodic guitar line with them but it really helps drive home the subterranean aesthetics they aim for, without all the claustrophobic, smothering stereotypes you'd find in cavern-core death metal. Some will probably find this approach a little cheesier, but I couldn't give much of a fuck since this is the sort of band where the mood itself is central to my appreciation and Dauþuz hasn't faltered from creating such an atmosphere, almost entirely through the riffing and keeping. The material here on the EP probably has the most even distribution of flooding faster rhythms and then the more gradual, melancholic bits where they make good use of harmonies. The acoustic parts are just as impressive as ever, gloomy and Medieval fireside vignettes that doesn't outstay their welcome, and are often paired up with some snarls or screams or samplings of the tools of the trade central to the theme.

Lyrically, this one stretches a little bit more into folklore territory on some tunes, which I think is welcome. In fact, while I love the historical mining theme, I wouldn't be put off if the Germans decided to do some fully fantastical concept albums in the future. An album about Moria? Sure, or pretty much any dwarven lore from any setting. They still don't incorporate dungeon synth elements, a request I had from back on my critique of their first album, but I think by now I've fully forgotten about that, because they've just become so solid at their sound, and it's not like I can't get that stuff from a thousand other places. Again, highly recommended from me, I think Die Grubenmähre is the best starting point to explore their sound, but this EP is entirely complementary to that.