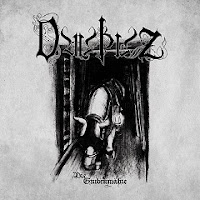 Dauþuz' second album, Die Grubenmähre ('The Mining Horse'), doesn't distinguish itself all that much from their debut, but for being just a year apart it does seem as if the duo were pursuing a slightly more dynamic range to their riff patterns and the result is a more foreboding and desperate effort than its predecessor. While it might lose a fraction of the first album's brightness, there are a number of minute shifts here which make it more of a soul scarring listen. Never mind the thematic implications of the title and cover, thinking back on these ancient work-beasts and their thankless and fatal toiling at the behest of their domesticators, automatically casting shadows of sadness and empathy across the recording, but the music itself carves into you like a pick into the stone.

First off, the vocals are far more intense, aiming for that more suicidal, screaming tone that you find in a lot of suicidal or Burzum-like black metal, sometimes to ghastly, delirious heights, but playing them off against the rasp of the debut, and some deeper groans and growls. This permeates the music with a more panicked appeal, as does the harsher flood of rhythm guitars. They still ingrain their chord selections with a lot of melody, but Die Grubenmähre at its heaviest does feel more brutal and unforgiving than the album before it. The mid-paced rhythms remind one of Blood Fire Death a lot, with different vocals, but just as much pomp and glory. Tempo and mood changes here often feel more abrupt than before, but also much more effective, such as when they'll let a single tremolo picked guitar start off into the distance and then trample it with the ferocious howling, blasting and some chant-like vocals which hover on the edge of perception. Some of the percussion here on the low end really thunders along, almost as if representing the thudding of the mining tools down in the depths of whatever doomed excavation the Germans are on about.

Bass does not play a very strong present in terms of sculpting and molding the songs, as it didn't on the first record, but the rest of the atmosphere is solid enough that you'll be following right along with the rest of the instruments and won't care a whole lot. When these guys hit a beautiful riffing passage as they do in "Dem Berg entrissen", it's instantly more memorable than the material off the prior outing, and almost all the non-acoustic songs across the 50 minute span of this disc have at least one such moment which will send thunder and shivers down the listeners' spine. Ultimately the album is better than its forebear in all categories, offering the same style but fleshed out into more dramatic upheavals, nastier vocal passages and songs that resonate well past their playtime. We have the evidence that Dauþuz is not just some one-off, but a promising new voice on the German scene which offers heavy immersion into its specific theme, very much worth experiencing whether or not you lie behind the language barrier as I do (though this is mostly fixed with an online translator).