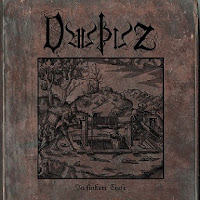 As an individual whose atavistic tendencies are often triggered by the art he chooses to experience, I fully endorse using metal music to explore historical themes, persons, civilizations, and eras. Black metal, perhaps due to its inherent grandeur, atmosphere, mysticism, and instrumentation has long been the main sub-genre in which this transpires. Germans Dauþuz have chosen to hone in on the advent of European mining in particular, an excellent, interesting concept which immediately attracted me to the group's music, which as it turns out is also quite good. A bit on the conventional side, where I might have incorporated more directly ambient or cavernous sound to immerse further into the theme, or perhaps some overtly dungeon synth elements, but I think they at least succeed in transforming the roots of this critical industry into something suitably intense, oppressive, and melancholic.

My German is rather pathetic, and for this reason I wasn't able to translate everything perfectly, but I believe the album title here translates to something like 'In dark (or sullen) depths', and man do the lyrics to the tracks on this debut relay that through descriptions of not only the environment and process that these centuries-old diggers and spelunkers experienced, but also the tragedies which often befell them, a perfect topical choice for black metal which is at once desperate and angry. When Dauþuz is charging ahead with some sorrowful melodic stream of picking over a blast beat, and vocalist Grimwald is spitting out those tortured, sustained rasps, you can easily picture in your mind the desperation of some workers trying to escape a cavern collapse and grasp futilely at the last light they might ever see. On a broader spectrum, this stuff falls right in line with a lot of glorious European black metal through which the listener can fantasize over some grim, idealized landscapes. It's not quite as claustrophobic as its subject might imply, but instead rather spacious and majestic enough that it could find purchase in the audience of Medieval black metal particularly prevalent in France and England.

There are not a lot of tremendously catchy individual riffs, but the overall songwriting patterns here are quite consistent throughout the experience. Guitars are savagely loud but gloomy, while the drums and vocals are mixed just right to accommodate them. Acoustic segues and interludes give you the real feeling of a night at rest after some exhausting dig, by the flickering firelight with a waft of roasted meat to accompany the dirty countenances and strained muscles of the miners. Structurally they don't deviate much from other acts of their style, but they do inject enough of a dynamic balance so as not to come off totally monotonous here. There's little I can promise that you won't have heard before, but this is a really solid debut with good production, and if you've encountered either of the members' other projects like Idhafels, Schattenthron, or Isgalder, or have an interest in Germanic veterans like Falkenbach, Horn and Menhir, then this one is a pretty safe bet to check out.