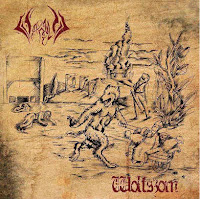 Wolfszorn is not a record reared on subtlety or invention, it's what you'd call a 'textbook' example of the black metal genre which does not step outside the margins of that realm in any capacity. I was immediately taken by the rustic folk art, as I often am within this genre, especially because the werewolf central to the image appears to be carrying the Holy fucking Hand Grenade from Monty Python & the Holy Grail. And also whatever the hell else is going on in the image. Is the dude with the sword in the taking a piss? Are those witches strung from the gallows in the background? Is that laborer exhausted or did the lycanthrope push him or her to the ground. Does anyone even care that this man-beast is driving a pushcart of Papal corpses through their village? And what's with that thing in the background. Is that a building on fire or just a very unusual-shaped potted plant?

So many mysteries to unwind, except for Varulv's music itself, which pretty much just kicks you in the chin immediately for a swift takedown, and then spends the next 36 minutes eviscerating and playing around in your entrails with its direct, ghastly traditional black metal. This is not a record which dabbles around with nuance or atmosphere, the details are straight to the face and perfectly content with that attack plan. That's not to say they lack some degree of dynamic range...the riff patterns here swerve between glorious, melodically-engraved charges and slower, nastier grooves, both of which recalled the Darkthrone of the early 90s, but there is no ramp-up whatsoever. Do not expect acoustical, haunting segues, intros or interludes, synthesizer scapes cultivating the full moon light to catalyze the transformation of the Varulv. Nope, this thing is in full Crinos form, ripping down the village doors and dragging the women and children, or rather the clergymen, to their grisly feast by fang and claw.

Guitar tone is a major factor here, it's kind of huge and mid-range and has a solid texture in which you can hear every note of a chord shining along, but still vorpal sharp and hostile. The black metal rasp is super carnal, which suits the subject matter, but rather generic in its inflection and doesn't have much ability to catch you...it could honestly use a little more flawed inconsistency which would lend it a little charisma. As it stands, the only deviation you get is when some ominous, broader growl is used to double it up. Bass doesn't really seep through this album at all; you can faintly trace it in the slower moments, but it's mostly all six-string testosterone and intense drum battery and that can grow a little dull, although the Austrians handle it with a professional competence. And truly, if you are in the mood for just black metal of the most obvious format, the most direct distillation, then I think there are some sections of Wolfszorn that wouldn't disappoint, but I didn't find the album to have much character beyond the obvious, much horror lurking beneath the surface carnage. The debut was creepier, if less forceful, and the third record Sagenlieder is more well-rounded without losing the teeth.