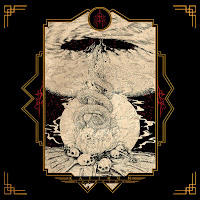 Unlike a lot of their fellow Canadian acts, Kafirun eschews the rustic and naturalist black metal atmosphere for something more hypnotic, ritualistic and blunt. That's not say that there aren't some nuances to Eschaton, their proper full-length debut album, but rather than having raw guitars that emulate the sounds of streams, wilderness and history, these guys go for the throat with a heavily blast-centric songwriting style and then layer the more atmospheric embellishments on top of it all through gruesome vocals which are often sustained into low rumbling chants, which honestly feel as if you're experiencing them bouncing off the walls of some creepy cavern deep below the light of the sun. This is a claustrophobic, unforgiving descent into the occult and philosophical horror which should please pundits who prefer their black metal to remain evil at all times.

Now, while I maintain that it hones in heavily on its faster paced material, I didn't mean to infer that Eschaton lacked dynamic value. In fact there are quite a few spots here where the material will move at a slower or more glorious mid-paced gait (as in "Omega Serpent"), and here the drumming gets more interesting. Guitars throughout are either melodic-tinted, fell majestic chord patterns or some that become faster and more drone-like or insectoid, which is where they actually introduce an alien, mesmeric sort of experience. We're not talking Deathspell Omega levels of dissonant, labyrinthine, fascinating riff structures, but there's plenty going on to keep the imagination engaged without ever sinking to idea-less, vapid repetition. I wouldn't say all the guitars are compelling, and you'll know where a lot of them are going within a few notes, but they keep the notes and patterns flying and occasionally there are a couple that will stick with your brain once the smoke and ash of the whole album experience fade. For me though the favorite parts are when they're streaming some evil chords, the drums are going full frenzy and then they break out one of those groaning vocal lines.

They also know how to dress up a track with melancholic or cryptic guitars that seamlessly erupt into the more aggressive speeds, so there's a lot of musical value to each beast rather than some soul sucking blasted monotony. The bass lines are loud enough to keep the furious drumming and guitar lines grounded, and while some might find the mix of the record calamitous or confusing I think it all worked pretty well in conveying the determined and horrifying mood. There is no warmth and happiness to what is transpiring across the 42 minutes of material, it's an explosion of moldy subterranean spores and viscera that only lets up to attack you with different, more measured angles of obscurity. Worth tracking down if you're fond of the dissonant and unrelenting style used by groups like Antediluvian, Mitochondrion, Dodecahedron, Ulcerate, Auroch, Deathspell or Blut Aus Nord.