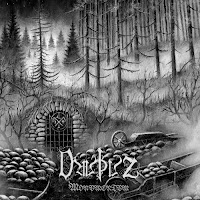 If Monvmentvm has any flaw, it's that it comes after three records which defined the conceptual freshness Dauþuz brought to their genre, and doesn't really do a whole lot to further expand upon or innovate upon that theme. Not that these are necessities in the composition of a great album, and this third full-length is quite good for all that, but I felt that at this interval, the Germans might pursue a little more nuance, layer a little more aesthetic variation into their formulas, or just come up with a masterwork to cap off what has already been a formidable slew of recordings. Instead, they play it rather safe here, if an underground black metal record with German lyrics about mining could ever really be considered 'safe'. I'm sure we'll be hearing it on our local mainstream radio networks anytime now. Wouldn't that be a world?

At any rate, this is still a fine record, from the outside in. Luciana Nedelea's gorgeous black & white artwork might be the most aesthetically pleasing of their covers, although I had no problem with its predecessors. The production of Monvmentvm is probably their most level and balanced, and while that might leech away some of its dynamic punch, it creates their most mournful atmosphere yet, accompanied with some very sombering guitar lines, and probably the largest number of woeful clean vocals they used yet, which are somehow even more effective in how they don't stand out terribly much from the instruments. The acoustic guitars continue to glimmer sadly, whether they are used directly in a longer metal tune or in the instrumentals, of which there are three. There were also some well integrated acoustic pianos at the finale of the album, its 10-minute title track. The guitars have been slightly more prominent on past albums, to be sure, but you can still here them quite well roiling against the drum patterns with their huge, glorious, if somewhat predictable melodic passages, and there are occasionally breaks where they get to breathe by themselves and its rather euphoric.

This is probably the Dauþuz album where no individual component stands out far beyond any other, but it's also strangely the most laid back, 'epic' experience if you're simply seeking an escape from your daily grind and wish to journey back to the grinds of craftsmen and laborers centuries past in a black metal transfiguration. You'll still have some of the suicidal howling to create tension and no insignificant sum of horror, but you can also pop this on your headphones and doze off (in a good way). Another notch in a belt of well-cut gemstones, but one does hope a little that the Germans' inevitable follow-up offers a slightly more expansive or ambitious piece of jewelry to complement what they've already adorned themselves with. I'd place it roughly between the first two albums in quality, and once more recommend it to fans of Medieval or atmospheric black metal with the adage that it's still quite firmly rooted to the genre's conventions and offers more of a thematic departure than a musical one.