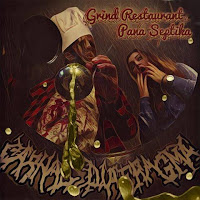 The impressions I once took away from the violence and spasticity of grindcore have long since abated for me, and these days I find myself searching far and wide for bands in this niche that can craft up creative riffing, interesting aesthetic themes, or successful cross pollination into other genres. The same old sped-up punk and core riffs don't really work for me, nor does the shock value or silliness of the vocals that I once got a laugh out of. Sure, the eccentricity and extremity of the lyrics might still get a tickle, or just the notion that there are so many bands out there still doing this and loving the fuck out of the style, but it's not often I reach for a record of this sort beyond the early goregrind staples already in my collection. So I've begun examining a little deeper into the European stuff, in particular the Czech scene which seems to have had a thriving grind scene for some time now.

Carnal Diafragma is fairly standard for the goregrind style, with effortless blasting, thick rhythm guitars spewing out riff patterns from the Carcass and Napalm Death playbooks of the later 80s and early 90s, and a mix of vomitous gutturals and gremlin snarls that are going for the gut laughs. They also pair these up with a couple churning, groovier slow sections where the riffs actually sound pretty solid, but you kind of get the drift in the first few tracks and there isn't much beyond that to surprise you. These guys aren't sample-heavy. There are a few, but usually they cut right to the chase and serve up a salacious menu of tunes that sort of stay on-theme with the album title, basically about disgusting delicacies. It's kind of a cute gimmick, but since I can't speak the language or even read the song titles without a translator, and there's nothing musically out of the ordinary to convey the vibe that you're in some grotesque bistro, the theme is only flesh-deep. Having said that, I don't think diehards for this style of grind would be too disappointed, because they capture as much excitement as possible into the tempo shifts, the cut-off riffs, the occasional breakdowns.

The production here is excellent, good and loud but not feeling like polished silverware. The utensils
Carnal Diafragma serves you with have been well washed in guts and goo, and the album will not lack for kicking your ass straight into the cauldron and then seasoning you up. The vocals blend together pretty well, again very voluminous but managing not to overshoot the guitars, and there is enough dynamic range within each of the 1-2 minute tracks that you'll never be bored, partly because they don't give you the time to, but mainly because with a 22-year history and numerous albums and splits already behind them, they know the ins and outs of this madness. I would even go so far as to say they can come up with a catchy riff about 1 out of 5 times, which is a good average in this style, but as many positives as I can lay upon Grind Restaurant Pana Septika, it's just not that addictive, a gruesome gourmet that you'll soon forget about once it vomits forth from your nethers.