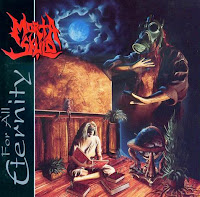 While they've never been numbered among the most legendary US death metal acts, one can make a solid case for the earlier works of Wisconsin's Morta Skuld as minor Midwest 90s cult classics, in particular the debut Dying Remains, which at its best was almost capable of going toe to toe with some of its Floridian forebears of around the same period. With the four full-lengths they released from '93-'97, however, there was a fairly steady, if not immediate decline in them writing much of interest, which bottomed out on the album Surface, upon which mediocrity was finally achieved. For All Eternity, their third album, and their first with UK's Peaceville Records, shows that there was still a little bit of fight left, a number of riffs that were clearly winners wedged among some that weren't.

I liken their style on this one to a heavier take on Chuck Schuldiner's Death, primarily the sense of pacing; or perhaps a few pages torn from the Obituary sophomore Cause of Death, or the first few Gorguts discs. The focus is on slower, heavy grooves, but keeping them dynamic and interesting, with some nice tremolo picked patterns and no tendency whatsoever to dwell on anything that might border on boring. Once in awhile they break out into a faster pattern, but they are all about keeping this thing heavy and really fleshing out all those chugging palm mute patterns so that they're easy to distinguish from one another. There's also a bit of influence here from more clinical thrash sounds, used in bridges or breakaway sections before they barrel back into some Morbid Angel-like groove. There are clearly a lot of riffs here that don't quite pass muster, but they just keep those breakdowns and tempo shifts rolling along, so the overall bodies of the tracks are well arranged and keep you interested if you dig your death metal plodding and pugilistic without being interminably dull.

The vocals are a gruff growl redolent of the bands I mentioned above, and not the strongest point of the record since they don't vary it up all that much by the lyrical patterns, but still competent enough, and I can't imagine what other style would really match the rhythm guitars. They lack the psychotic edge of a John Tardy, and actually cross a bridge into the more brutal death vocal style that was becoming popular around the same time through groups like Suffocation and Malevolent Creation. The drums here are very tight and groovy, the guitar tune a bit muffled but not as much as some of Scott Burns' worse mixes, and I think it's better produced than As Humanity Fades was, although the riff quality is fairly even on both those records. The cover art is pretty cool, the lyrics are more personal and thoughtful (ala Death) rather than a gorefest, and I'd have to say that if you were out scouring the past for some well-constructed death metal, this one holds up fairly well to this day. If not game-changing or constantly memorable, it's at least capable of filling out its 48 minute length without putting anyone to sleep.