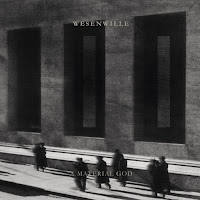 Perhaps my expectations were thrown off as I was looking over the dim and depressive packaging for this Dutch duo's sophomore album, but I was pleasantly surprised by the neurotic, fulfilling brand of black metal that the pair get up to, with a far broader dynamic range and sense of ambition than you'd think at first glance. While they do possess some traits familiar to their outward aesthetics...streaming, melancholic melodies splashed all over the place, and a general sense of brooding oppression that hangs like an evening din to the upper atmosphere of the recording, this is very riff-based stuff with a potential to explode one moment and then grow more pensive the next, with some bleak and enveloping ambient segues that fill in the gaps between the more guitar oriented fare.

Every song on this album has something going for it, for example "Opulent Black Song" with its ambience sprouting the bleeding, ringing guitars, slower tremolo pickings and chords to spruce them all up and create this wistful soundscape that crushes into you like the realization that you just lost someone or something important. Or a tune like "A Material God" itself which goes straight on the attack with its zipping dissonant guitar-work redolent of their countrymen Dodecahedron, or perhaps France's Deathspell Omega. The two really get a balance here of more unhinged, frenzied composition and then more controlled matter with some samples or slower climbs to aggression, and it adds up to a satisfactory overall experience. The vocals have a desperate, louder rasp to them with an edge of sustained growling which fits the brightness of the eerier guitar progressions quite well, and in fact it's the same musician also performing the moody and textured guitars, as well as the some thumping bass lines which support the melodies with some needed muddle to offset their comparative sparseness.

The drums are fairly simple through a lot of the steadier moments, with nice little kick fills and grooves that contribute to the spaciousness; however, on short notice they can transform into forceful blasting and follow the schizophrenic nature of the writing. They do have a somewhat mechanical feel to them, which almost lends the album a slightly post-modern/industrial feel on the low end, and I don't envy that they have to compete off against some truly catchy riff sequences that are, at least for me, the most poignant and memorable part of the affair. In sum, this is a pretty great record that hopefully won't be lost in the deluge of basement or bedroom black metal because its reach never exceeds its grasp, and it kept me cycling back to its nutty rhythms and the fresh atmosphere it excels with even if I can't really say that it's devastatingly original. If you like your darkness bleak, manic and beautiful then this is yet another of the Les Acteurs de l'Ombre Productions stable well worth your time.

Posted by autothrall at 9:23 AM