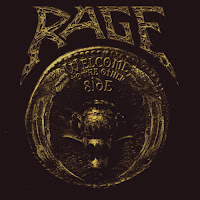 As far as launching and showcasing the talents of a new band roster, few albums in my collection are quite as potent as Welcome to the Other Side. After the lovely, memorable, and conceptual Ghosts, Peavy parted ways with his longtime partners in crime Spiros and Chris Efthimiadis and Sven Fischer, and joined forces with a pair of absolute monsters in drummer, who had played alongside such unknowns as Artension, Tony MacAlpine and Yngwie Malmsteen, and Victor Smolski, arguably one of the more gifted guitarists in European metal to arrive in some time, who was somewhat of a newcomer but certainly didn't play like one. Smolski had recorded some guitars on Ghosts, so this wasn't entirely his Rage rodeo, but here he is let loose to exhibit his wide range of mastered disciplines like the progressive, neo-classical and jazz influences he can so effortless weave into the riff-oriented material required for the Germans' distinct power metal.

Now, to be clear, this is not one of my favorite albums they released with this lineup, I like the two follow-ups considerably more, but there are a number of catchy staples here like "The Mirror In Your Eyes" and the surging "No Lies", both of which feature the vast instrumental capabilities of the band while reigning it all in with great vocals lines in which Wagner still spits out a little higher range reminiscent of the group's earlier years. The best riffs on the album are usually the dextrous speed/power metal progressions long attached to the band, but Smolski integrates even further levels of melody, some jazzy chords and fusion feeling leads to imbue their material with elements I simply hadn't heard before. Almost as if a continuation of the prior album, this one could be considered mildly experimental...but not at all weird. There are a number of softer pieces like "R.I.P." and "Requiem" which are largely just pianos and spaced out, atmospheric guitar leads with some narration that feel like parts of a rock opera, which they are as there's about a 15 minute chunk of stuff here comprising the 'Tribute to Dishonour' suite.

Other pieces like the clean, hyper-picked classical exercise "Trauma" or the highly proggy, measured gait of "I'm Crucified" also stand out a little, the latter sometimes reminding me of Savatage in the later 80s or early 90s...in fact you can hear a bit of Gutter Ballet or Streets: A Rock Opera throughout this, despite the band having a different approach from a different continent. The same could be said of its predecessor Ghosts, of course, and a lot of that bled through onto this one, in fact the entire 'Lingua Mortis' concept from the 90s was returning until it would later be separated into its own things. All of this is perfectly acceptable and Rage are no chumps at performing it, but the mellower stuff takes a backseat for me to the aggressive writing that I prefer. "Deep in the Night" is well written and actually has a pretty catchy chorus build that feels like it belonged on Ghosts, but there are too many throw away tracks like the classical tapping of "Lunatic" which reminds me of Joe Satriani's "Midnight" only nowhere near as good. I get that Smolski likes to strut his stuff but I just don't feel this is the place, especially when he's not going to go all-in and shred your face off with something substantial.

Alas, there's a whole lot that went into this one, over 60 minutes worth, and the sum of its parts just isn't overall as valuable as a handful of its best cuts. However, the writing is on the wall: there just isn't much that these three will be unable to attain together, and while Welcome to the Other Side is surely a competent effort with a lot of elements that would please a lot of people, it's the album following this one which really tightens the trio and makes a statement.

Posted by autothrall at 3:42 PM