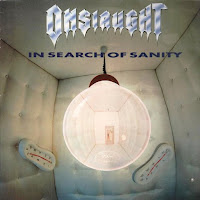 Although there wasn't terribly much of a stigma attached to the third Onslaught record when it dropped at the end of the 80s, it's an album that has been unfairly maligned through the decades; if not outright hated by thrashers and fans, then at least placed in the mediocrity box more often than it deserves. Like many, I found it quite the shift from Power from Hell and The Force, transitioning away from the more cult thrash and influential proto-death metal of those releases into a sound that was a little more fit for a time when the thrash genre was becoming more involved, complex and frankly interesting...as much as I love the basic, rudimentary classics of the genre, hearing a band like Artillery or Coroner or Deathrow crank its potential up a few notches was more than welcome. Teenage ears seeking fresh sounds, not repetition of what Slayer, Possessed, Exodus and Metallica had already mastered in their primes.

Artillery is probably the most apt comparison, because In Search of Sanity has a sort of power/thrash hybrid feel to it redolent of those Danes' first two albums, Fear of Tomorrow and Terror Squad, if not the brazenly brilliant riff-gasm that was By Inheritance. This one is definitely characterized by its longer, more ambitious riffing structures, a superior balance of melody and aggression to its own predecessors, and last but not least the addition of Grim Reaper crooner Steve Grimmett. I was particularly curious to hear what Steve would contribute once I took note of this lineup change, for as effective as the vocals were for the earlier, harsher, more direct albums, I'm not sure that would have worked as well alongside the guitars here. He doesn't sound too different than in his alma mater, and strangely I think it's those more melodic phrasings that add a lot of depth to the hammering, juggernaut riffs which owe as much to West Coast US thrash metal to anything else. Groups like Heathen, Defiance, Metallica and Testament are great comparisons to the processed, bottom end feed of the muted guitars, or perhaps better yet this is in the same mold as fellow Brits Xentrix on their first two discs.

When I was younger I remember being swept up by the rather robust track-lengths, which never became boring even with the 5 minute instrumental opener, or the 12+ opus "Welcome to Dying". There's always something catchy waiting around every corner, and throughout each of the arguably bloated pieces, Grimmett is casting out another melody. He uses a lot of sustained notes which are a cool contrast to the busier guitars beneath, which are just constantly chugging and driving along courtesy of Nige Rockett and Rob Trotman. The leads here are pretty good, always controlled and never arbitrary or long in the tooth, and I also thought Jim Hinder's bass sounded pretty good, especially where it got a starring role like the verses of the cover of AC/DC's "Let There Be Rock", which I remember being another of those respectful and semi popular tributes of the 80s similar to Realm's "Eleanor Rigby" or Testament's "Nobody's Fault", the band making it something of their own rather than copying the original too closely. The drums are also pretty good, snappy and straightforward but tossing in a good cadence or fill here or there.

Over 30 years later I'm still digging both the momentum and construction of this record, and along with its two predecessors I still consider it the highlight era of the band's career. While newer Onslaught albums are met with a good deal of critical acclaim, I find them to be rather generic, if not awful. For the same reasons I'm not that into modern Slayer, Rob Dukes-fronted Exodus and Warbringer, I just don't find them to carry the same level of personality as they used to. In Search of Sanity might indeed not have the cult, battle jacket-worthy credentials of its forebears, and perhaps it's worth it to even go back to this one and think of it as a separate band entirely, but if you enjoy the well-crafted, accessible thrashings of the later 80s then I think this one easily meets the demand, even when it goes a little long in the teeth. In fact I'm almost a little sad that I didn't hear more of this with Steve in the roster.