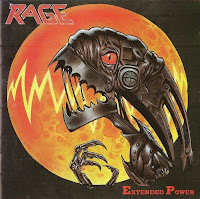 While Rage has never in my estimation ever put out a truly bad album at any point in its career, the Extended Power EP was probably the first sign for me that there would be a few chinks in the band's armor, that the 80s streak of brilliance was about to come to an end. Not because this was ever anything more than leftovers, and most fans have probably experienced its content as bonus tracks on a CD version of Reflections of a Shadow; but in the context of a new EP it just didn't leave me with a lot of memorable material, and hailing from a group that provided me with nothing BUT that, I was understandably let down. Rage is just a band synonymous with my Junior High and High School years, I was one of the only guys who listened to a lot of this stuff despite the raving popularity of arena metal in those times, and a bit of a hipster, and I really thought they deserved to be the next thing until this and Trapped! sort of humbled that idea.

The long and short of it is that the two lead-in tracks and selling points for this one, "Woman" and then "Ashes", just sound like parts of previously released tunes from Perfect Man, Secrets in a Weird World and Reflections patched together into also-rans which weren't really worthy of those albums. Don't get me wrong, "Ashes" in particular has some decent moments to it with the driving triplet guitars or the more atmospheric breaks with the lead and clean guitars. You're getting some vintage Peavy with all the range of the LPs leading up to it, but his lines just fail to hook me. Some of the other content here is a little more exciting..."Bottlefield" being a resurrected Avenger track which is the best novelty on this album, with some great leads, as does the "What's Up" instrumental, which also has some fun rapid bass breaks, but even these aren't top shelf Rage tracks. "Waiting for the Moon" is one of my favorite tunes the band has ever written, but of course it was an album track, and the seven-second clip at the end of the EP is just stupid, the sort of unnecessary padding people used to do because they thought it was somehow funny.

I like the cool Soundchaser image on the cover, and again none of the material that was unique to me here was necessarily bad, but half of me thinks that if something isn't really worth releasing than maybe it's best to leave it behind. Rage had put out a LOT of EPs through the 90s, and one wonders if they earned enough to justify them, or it would have been better off just to assemble all of this detritus onto one extended LP of rarities, rehearsals, covers, etc; or as they later would do, include them with the appropriate full-lengths as bonus tracks. I managed to pick up this one when it came out and can't have listened to it more than once or twice before selling it back on the secondhand market. It's not strong enough to follow up that killer 5-album streak before it, or even to signal the direction the band would be taking into its second decade, so it was sorta dead on arrival.

Posted by autothrall at 9:28 AM