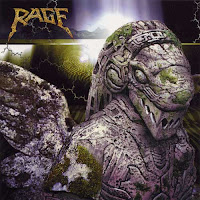 End of All Days might not be able to match Black in Mind or The Missing Link blow for blow with regards to memorable content, but this is at least the album where I think they got that 90s production style down pat. The guitars feel beefier and punchier, but cleaner against the other instruments, and it just sounds great churning out of my car stereo or PC speakers, while keeping that generally more aggressive sound which is a little more low-end-heavy and thrashing than where they were headed at the end of the previous decade. The Andreas Marschall cover art on this was quite cool, I like how they integrated the Soundchaser mascot into a sort of Mayan, apocalyptic aesthetic and this definitely triggers the Aliens and Predator nerd within me. This is also another encouraging example of how so many European bands kept classy while their American counterparts were falling apart. Sure, this is no Perfect Man, but an album like End of All Days is exponentially superior to bullshit like Load, Re-Load, Risk, Demolition, and The Graveyard.

It's a strong effort, perhaps even a little underrated, but it doesn't exactly drip with the then-modern day classics that were present on the others I mentioned at the beginning of the review. For every "Higher Than the Sky", there are a half-dozen songs that few will remember. "End of All Days" is one I really like, the perky little melodies in the riffs and Peavy giving us some sustained Rage range, even if it's obvious from the previous album and this one that his voice was already becoming limited after over a decade of touring and recording. A lot of dark, mysterious, brooding pieces here that maintain the apocalyptic or horrific vibes that the band had been hitting hard in the 90s, and a cut like "Voice from the Vault" is a great manifestation of that. Even as I journey deeper into the track list, everything holds together quite well, but tunes such as "Face Behind the Mask" and "Silent Victory", while competent, varied, and well-produced, just seem to lack a little of that staying star power which would populate set-lists for the ensuing decades. They experiment a little with some other guitar effects, very mild orchestrated feel from Christian Wolff, but even though Lingua Mortis had dropped earlier in the year, it doesn't rub off too much on this.

I can listen through End of All Days without ever feeling too bored or disaffected, but it's not adding a lot of new tricks to the Rage legacy, maybe just smoothing over the studio side of things while keeping the general level of competent songwriting high enough. It's not as catchy or experimental as a lot of its neighbors, so I'm not even sure how much enthusiastic the band would have been for this collection of tunes as they had their heads in the ambitions of their symphonic side. I certainly remember grabbing this one while away at University, and being pretty happy that some of my German heroes were holding the fort while the heavy metal genre at large was simultaneously imploding and mutating. In fact, it was this streak of mid 90s power metal staples from overseas, as well as the emergence of stuff like black metal and melodic death, that initially got me interested in writing reviews and doing my old paper fan zine, which eventually led to my tireless devotion to exploring all this stuff well into Middle Age. So a solid album with good production, and a slight sentimental attachment, just not among their best.

Posted by autothrall at 8:23 PM