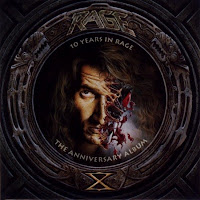 It's an interesting premise: an album created to promote and celebrate the first decade of a band's existence, and comprised not of entirely new compositions to show where the band was currently at or headed, but a whole bunch of cutting room floor material from the era of the band's first seven studio full-lengths, being recorded for the first time in either its original form, edited, rewritten or expanded. It's almost as if Rage decided, rather than consigning a bunch of odds and ends to an endless cavalcade of B-sides and CD bonus tracks, of which they already had a great deal, to properly repurpose and smooth over this material into a more palatable presentation that fans will care about a lot more than if it had just been left in the ether, or squandered as bonus tracks. It's a good and worthy idea; granted, a great percentage of musical artists build their product from a number of ideas they're recycling through their history, but this is just a more formal and 'official' way to market it. I'd also be lying if I said I hadn't been jazzed up at the chance to hear more material in the mold of one of my favorite German bands' 'prime', or at least what I considered to be.

Sadly, 10 Years in Rage doesn't light the world on fire with a bunch of unforgettable material, and many of the tunes probably represent filler at best, but not for any lack of trying or laziness on the band's behalf. In fact, a lot of the tracks probably just can't overcome that shaped around riffs and progressions that weren't all that catchy in the first place. You've got some blazing material on this like "Vertigo" and "Dangerous Heritage" which feels like vintage Rage momentum sans the truly memorable chorus parts. There are a handful of riffs or passages on the album that are worthwhile on their own, and if you just have a fondness for the band's overall style then I can't imagine you'd feel ripped off by this, as background noise it could be worse than just to have more 'Rage' playing. A handful of cuts like "Take My Blood" seem like they might have been contenders with a bit more of the tweaking they'd already undergone to make it here. The high level of competent musicianship and conviction displayed by this quartet is in no short supply, with an especially great performance by the new guitarists Sven and Spiros who have stepped into Manni Schmidt's seat with a loyal grasp of the group's traditional riffing and lead styles. Had I not looked at the actual lineup on the album I wouldn't have noticed, although I'll add that Manni and a bunch of the band's other alumni are present on "Prayers of Steel '94", whipping out some leads and drum battery.

I don't really care for "The Blow in a Row", a medley of earlier tracks across the band's first decade, entirely unnecessary as almost all of them should be sought out on their own for the far superior listening experience. We don't need a 'sampler' here, so this is a complete toss-out. Another issue I take is that this is one of those 90s Rage albums that suffers a bit from the drier production; quite like I scored some marks against the otherwise-great Missing Link, this one just doesn't sound all that good when I compare the mix vs the instrumentation. So in the end, while 10 Years in Rage is on paper a really compelling idea, a little more effort might have been spent on how the recording came across the speakers, and perhaps chopping off the useless medley and the 'new version' tune, despite all its fun lead guitars. What remains would still have proven one of my least-regarded studio albums of their whole career, but it would have felt a little more worthwhile as a panoply of Rage cuts that I would not have otherwise experienced. Sandwiched between two of their rock-solid, and most famous 90s albums, it's understandable why this one is so often neglected.