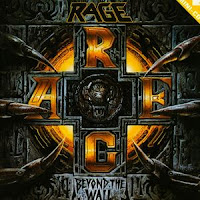 It makes all sorts of sense for a German band like Rage, which is often tackling sociopolitical subjects in its lyrics, to pay some sort of tribute to the Berlin Wall, and though it took a couple years, you could view this EP as their way of dealing with that or at least referencing it, even if the lyrical subjects aren't unanimously contending with that. This is another of those short-form reviews from Peavy and company throughout the 90s that, in hindsight, has become entirely useless other than maybe the kind of nifty cover by Andreas Marschall who would use that decade to become the God of German Power Metal Covers. All of the content has been scattered about reissues of several of the band's full-length efforts, but since my initial exposure was to this as a standalone product, I will once again cover it as such.

The material here definitely melds in with the style of their post-Reflections material, where the trio is starting to regain a little of the thrash metal aggression and record with a cleaner, more direct, cubicle sort of production. Had these tracks popped up on Trapped! or The Missing Link, they would have fit in rather flush, other than the fact that they are mostly filler quality tracks which don't all cultivate riffs or chorus parts that are ultimately memorable. "On the Edge" is a decent one that I could remember not only for its presence here but also as a bonus on the Execution Guaranteed CD that I picked up. A nice, choppy verse riff melody and a galloping bridge, but it's still not top shelf Rage. "I Want You" has a pretty uppity guitar lick in the verse, something that could have shown up on Perfect Man, but the rest of the track is rather dull as it never escalates to anything that can complete with Manni's riff. I think "Last Goodbye" is probably one of the better inclusions with its savaging, hammering guitars and a chorus that at least teases that it'll be catchy.

Depending on which edition of this you got, you were treated with an acoustic tune or two, and I have to say with some dismay that this one really sucks..."Light in the Darkness" is such a shrieking and feel-good anthem on Secrets in a Weird World...but the clean version saps it of all that impulsive and essential energy, not to mention that the vocals don't quite stick the landing. The glimmering acoustics capture the notes clearly enough, but it just doesn't benefit whatsoever from being wimpified, it's an embarrassment that the band shouldn't have bothered to share with us, or the audience at this gig for that matter. On the Japanese version they've got an acoustic version of "Dust", which is a little better suited to the treatment, but still doesn't feel remotely necessary other than the band trying to feel good about itself for spreading its wings. None of the harder hitters come even close to this level of mediocrity, mind you, so it's not that Beyond the Wall is pure rubbish, but one would think with the opportunity to explore this topic they might have even pulled out the stops, written some great new songs, or a full-length even...this is leftovers at best, few of which are much good. The heart was in the right place, but the songwriting simply wasn't.