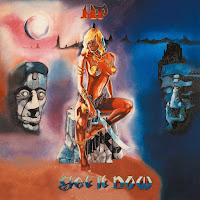 MP was another casualty of the 80s European metal surge, a band that might have stood out a little more against its flourishing scene if there were simple a few less sharks swimming in the pool. For all intensive purposes, they have a sound extremely similar to other German acts like Faithful Breath, Samain and the mighty Accept, but as a card carrying fan of all three, I don't know if I can quite get enough of that particular niche, so an album like MP's Bursting Out or their second, Get It Now is something I consider a treat. As a full re-release of this LP approaches through Dying Victims' sub-label 'Relics from the Crypt', perhaps its time to give a glimpse back at what I'd honestly consider the best disc of the group's four full-lengths between 1986-1992, one that cleans up well and certainly scratches my itch for well-written if slightly indistinct traditional heavy/speed metal from the middle of that decade.

Their debut Bursting Out (The Beast Became Human) was similar in structure, but suffered from a more brash, uneven production. Part of that gave it a nastier charisma, but as it turns out, the smoothed over sophomore exceeds it with better hooks, stronger choruses, quality lead guitars and, let's face, it a much cooler cover art that seems to be channeling Valeria from Conan the Barbarian. We're talking total traditional Teutonic steel here, they've got a bit of more energetic pep than Samain's Vibrations of Doom, with a similar, raunchy vocal style from Thomas Zeller, but then again he's not so explosive as his countryman Udo, and I think that's probably the reason a band like this got raked across the coals, there was just a much huger presence in that niche from Accept, Running Wild or Warlock, or the emergent power metal of Helloween in their earlier incarnation. But that's not to take away how damn consistent Get It Now is, firing off some catchy, pumping openers like "Not for the Innocent" or "Claws from the Night" that make for instant heavy metal magic, provided you can get behind that melodic but sleazy strain in his delivery, one of my favorite characteristics of this album.

The rhythm section here is likewise strong, with Zeller's throbbing if 'stock' bass lines driving a lot of the songs' momentum, and Michael Link giving a moderately-paced, tireless hammering. I really love the guitar tone too, shifting between the agile, often palm-muted patterns and leads, the latter of which have a bit of flair to them not unlike Rage's Manni Schmidt, only MP isn't overall near that band's level of intensity and innovation. The band does seem like another of the countless groups in the 80s that were still flirting with the idea of the hard rock roots, and this translates into cuts like the brilliantly titled "Rocktober Blood" (and I say that with no irony), or the strangely subdued instrumental closer "Slow Down", which is like a mellow rock thing just over a minute which seems like it was a fragment of some other song that could have used vocals. Thankfully the band never goes all out power ballad, "Cruel to the Heart" seems to tease that for a few seconds before rocking its face off.

I don't think there's a single track other than that instrumental outro which I find weak, but my faves here are probably "Not for the Innocent", "Claws from the Night", "Hawk of May", and "Never Trust a Woman" which is one of a couple tracks here that sound straight from the Wolf Hoffman playbook. If you don't care about pretention or requiring anything stunningly original in your metal, and you often find yourself leaning back on albums like Breaker, Vibrations of Doom, Gold 'n' Glory, Burning the Witches, and Gates to Purgatory, then I think you'll hear a natural affinity in this album and find it worth the time. It's definitely one of those albums where I can lead in by dating it or defining it as a chronological relic, but to these ears it really hasn't aged a day. It sounds because metal is indeed eternal and anyone trying to convince you otherwise is still your enemy.

Posted by autothrall at 9:07 AM