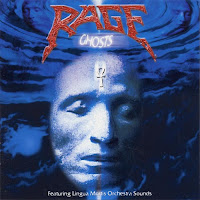 Some might be hesitant to praise Ghosts for its ballad-heavy, rock opera feel, and the relative lack of speed and heaviness compared to so many of the Germans' records past and future. But damn if this isn't one of the last truly great, and most unique efforts Rage would produce, which took me entirely by surprise, even with the preparedness that XIII offered me. Ghosts is a more distinctly 'symphonic' metal album than the one leading up to it, with a wider variety of both orchestral and synth sounds that create a broader arsenal for them to rock against. It's also a concept album, and really capitalizes on the emotional potential when one is speaking of life, afterlife and the veil between them, and it does this with some of the catchiest anthems the band would weave through their entire 90s catalog.

This is by far the best work Christian Wolff performed for the band in the studio, with a mix of epic, Wagnerian pianos and symphonic swells, and some more proggy synthesizers where it suits. The riff set on this album is likewise incredible, with each of the rhythm guitars playing perfectly off the keys and vice versa...everything shines, nobody smothers anyone else. The drums are great, they sound like they can support an entire in-the-flesh orchestra, and while Peavy is more focused on vocals here, the bass playing is fluid and he pops in a couple cool lines and fills to keep that end of the sound interesting. His voice is still in fine form, not reaching the pitch needed for early screamers, but sustaining quite well in that higher-mid range. There are a couple moments where the lyrics and his voice interact in a mildly goofy way, but I think that's just because you've got this big German dude singing in his second tongue and it's bound to have a few creases. Still, the meaningful lyrics go a long way to compensate for any flaws you'll find there, and he's still doing some harsher howling or lower crooning in here contrasts nicely against the passionate chorus sequences.

Even if I'm throwing on the bonus tracks for this one, that's about 13 tunes, with few that could even be considered weaker than the rest. Maybe I occasionally forget about "Six Feet Under Ground" or "End of Eternity", but they're both fitting to the concept and pretty decent as I revisit them. But the emotional core for this album is the martial, measured "Back in Time", the doomy trudge of "Ghosts" and unforgettable "Love and Fear Unite", with its sweeping synth flutes and strings that erupt into this totally awesome chorus which will make me smile if you have even a faint resemblance of a soul. The album goes a lot deeper than, with stuff like "Vanished in Haze" which is a prom ballad not unlike Bon Jovi's "Never Say Goodbye", only a lot better and with less glam bullshit; or the even more cheesy but heart-punching "Love After Death", yet another of these slower pieces with acoustic guitars in the verse that explode into some nice, climbing riffs and orchestration. There really aren't many complaints I can conjure up over the core 50 minutes of material, it's a ride...provided you're willing to get on...

I mean if you're only familiar with the band's early era as Avenger or the first 7-8 Rage records, you might be a little shocked at what you've got on disc here. There might have been tiny hints on stuff like Reflections of a Shadow, or the fat they obviously liked classical music (i.e. the intro to Secrets in a Weird World), and were quite catchy with it. But Ghosts is that whole side idea manifest into the best the band would ever do it, and while it's probably too accessible for some, there's nothing exactly sellout or commercial about it...this shit just wasn't that popular by the close of the last century. Maybe Therion, maybe the Trans Siberian Orchestra's evolution from traditional bits of Dead Winter Dead era Savatage into an entire band, but most were gettin' their nu-metal on by this time, or we had to suffer major metal bands of the 80s continuing to churn out shit. I'm not saying Ghosts isn't a little too teary-eyed and cheesy, or that hearing Peavy tackle some of this stuff with his style of voice doesn't induce a fraction of loveable cringe, but the sum results are so well written and sincere that this is still a good listen decades later, and certainly the best step Rage ever took outside the comfort zone to which it would, in some capacity, return.