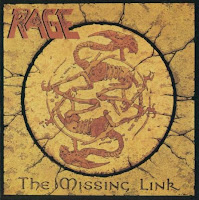 The fossilized Soundchasers on the cover, and the very familiar Perfect Man vibe given off by the opening riffs to "Firestorm" had me juiced up that The Missing Link was going to be a loving throwback to the 80s Rage sound. It certainly incorporates that to a degree, although it's very firmly rooted in the more direct nature of their output for the following decade, and a pretty natural successor for the previous year's Trapped! There are plenty of new ideas to be found here; clearly Peavy and Manni Schmidt were far from finished exploring their fretboards, and while it doesn't quite rise to the level of catchy ambition that the band had achieved in the past, its a workmanlike, well-written affair which substantiates the Germans' legacy and keeps a promising window open to its own future.

I know more than one Rage fan who was introduced to the band through this very album, and it remains their favorite to this day, and while I can't hang with that, I think it's an understandable perspective as I have very few criticisms of this one. Most of the tunes here have key hooks carried into good choruses, and there's a thundering positive energy here which isn't to be denied. A track like "Refuge" is nearly as good as anything they'd written before, from its sticky chorus in which Wagner lifts his voice, to the driving bridge & lead. They still can rip out some street-level, fist-pumping tunes like "The Pit and the Pendulum", and yet the speed and finesse are writ large over half the bloody album, there's rarely any need to slow down because they can remain pretty damn consistent and memorable with velocity. Peavy's range is intact here, even if he's not using quite as manically as the past, but I particularly like his more painful sub-shrieking tones that give the songs like "Lost on the Ice" a sense of tension and nervousness. As a trio, the proficiency level here is so high that I'm not sure many other bands on Earth could have compared in 1993...

But...there's something about the mix on this album which rubs me the wrong way...it's hard to pinpoint, because when I dissect the individual vocal lines or guitar tones it all sounds right. However, when it's all flying at my face I feel like some of the higher drums, maybe the crash, drag a little much into the speakers and it's off-putting. The guitars are bright and loud, but there's just some kind of air or hiss to the whole thing that has followed me like a black storm-cloud from my original cassette copy, to the CD, to the mp3s I ripped, to streaming versions I've heard on YouTube. I did check out the Dr. Bones Records remaster and I do think that addresses it to an extent, if you were interested in this one the first time I'd advice you to head straight to that version, but ultimately, despite some really good tunes, that has always clung to my impression of The Missing Link and held it back slightly from reaching the heights it would otherwise attain. The depth, richness, and ambition to create power/speed metal with the distinct Rage personality is present just as it was with a Perfect Man or Secrets in a Weird World, but it falls just a little short of even Trapped! in the presentation. Still, if you were to ask 19 year old Autothrall if he thought the trio were even on the precipice of producing a stinker, the response would have been a resounding 'fuck no', and that stands. This is a legacy band with so much great material in its arsenal that a randomized playlist would prove nigh on endless; The Missing Link is no slouch and it would have numerous worthy representatives on that list.