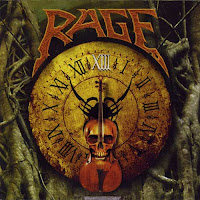 XIII is one of a few Rage albums at the close of the 90s upon which the group decided to lean very heavily on their symphonic influences and incorporate the 'Lingua Mortis Orchestra' idea directly into their metal albums. As loathe as I was that one of my favorite German acts would submit to impulses of rock opera and Broadway balladry, I'll admit that they did a pretty good job of it on the 'main' releases where the style was implemented, rather than the junky scrap EPs and Lingua Mortis album that had come out a couple years earlier. In fact, the orchestration of Christian Wolff is spun so smoothly into this record that, if you hadn't already gotten history with the Rage catalogue, you might think that this was just the fundamental sound on which they were built.

There's a tradeoff. While the musicianship of the quartet loses nothing in terms of proficiency, it's dialed back a lot to let these horn and string sections breathe. It feels like the band is really playing along with an actual symphony, and unlike other extreme metal bands who would later try and clutter everything up by going overboard, the Germans are restrained and entirely song-focused, and that's what makes this album a cut above. This is not some showboating affair, but an attempt to compose emotional resonance which makes this pleasant to listen to even decades later; a trait that would carry on to following album. Look, I'm all for the shrieking excess and dizzying speed metal licks of their earlier years, but I'll take the tunes on this one over ANYTHING the Trans-Siberian Orchestra has ever released, and I can only image if Rage had decided to focus on covers and not their original fare, they might have achieved some sort of massive stardom the likes of which that post-Savatage project did. But that just goes to show you this was no cheap cash grab on the emerging trends brought about by groups like Therion; these guys were serious about stripping down their sound and adding a new component, tastefully.

It's exceptionally clear and well-produced, with the guitars and symphonic keys in perfect balance above the very audible rhythm section of Wagner's bass and Chris E's drumming. Peavy's vocals actually sound really good hear shifting between his angrier, gritty ravings and the soothing mid-to-high pitched stuff he uses over a lot of the softer or more sentimental parts. I don't know if there's a single song on this album which lacks for something really catchy..."Days of December", "Over and Over", and "Heartblood" are all fine examples of good riffs, memorable vocal lines and keys working in tandem, and they don't have to entirely abandon the energy and heaviness of their former selves. "From the Cradle to the Grave", with its almost goofy symphonic groove, burrows itself straight into your ears and brain, and while "Paint it Black" is a really generic choice for a cover, and my least favorite piece on the album, they actually do well to merge it into this orchestrated metal style and make it blend in seamlessly with the aesthetics of all the originals.

Despite the shared DNA of Mr. Wagner, XIII is not the Rage I grew up on, but the way the band threw itself at this challenge showed restraint, nuance and an appreciation for how these styles should be balanced. The result was, at least for me, the best album they had put out since 1990's Reflections of a Shadow, and to think, a year later they'd up the ante even further...