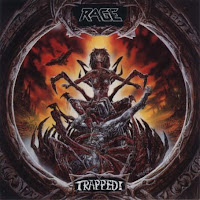 Trapped! is the beginning of Rage's initiative to adapt a sound that might remain more relevant against the 'challenges' to traditional metal that arose throughout the early 90s. That sounds silly in hindsight, to be sure, because we all know that heavy metal fucking rules, always will, doesn't truly age, and has arguably the most loyal fanbase of any genre of music produced on Earth. But certainly there was an attempt by the Germans to bring back a little of the thrash roots, enhance their 80s aesthetics with a tiny fraction of groove, and create a more down-to-earth style which relied slightly less on the shrieking and speed, but still kept a lot of the flair and finesse which, let's face it, the Wagner, Schmidt, Efthimiadis lineup was never going to be shake off since they'd spent those fertile years mastering it. Now, having said all that, Trapped! is still fairly close to the records leading up to it, like Reflections of a Shadow. There is no material here which needs to adapt the grunge, rapcore, metalcore or nu metal trends that Peavy was happily shrugging off, but it clearly sets the blueprint for popular albums of their second decade like The Missing Link and Black in Mind while maintaining the vocal range and musicianship of its predecessors.

While I was not quite as enamored with this as the five (or six) previous albums, there is no question that this was still a Rage firing on 110% and loaded with ideas for riffs and choruses. Andreas Marschall crafted one of the best cover images in their entire catalog, with some spidery demon queen ensnaring the Soundchaser in her multi-limbed clutches, and the production is quite good. Maybe you're getting a little less of the reverb and airiness (other than Manni's lead licks), and a mix that is more straight to the face while still capturing a lot of the details mustered by this highly proficient three-piece. While Peavy is not screaming by default as he was on some earlier albums, his voice is still capable here and he can almost effortlessly lay those out among his raving, wildman midrange on tracks like "Medicine" and "Solitary Man". The drumming is excellent, with a bit more of a hammering double bass attack, and Schmidt is just as much a monster on this album as those before it. I didn't find the riffing as catchy on a 1:1 basis with earlier Rage, but the arsenal is still full and you're getting a lot of choppy little melodies strung in among almost all the harder hitting progressions, and there is also plenty of variation throughout, even to justify all thirteen tracks; you were still gonna hear something relatively new on each.

Trapped! actually ages quite well, and in truth I probably rate this more highly now than I did back in the day, because it's well-enough written, consistent, and managed to keep the band relevant against the changing heavy music landscape without abandoning its principles. The musicianship is as top notch as this lineup ever produced, and while some dread the 'mature' tag, this album is clearly more seasoned than the screaming excesses of Perfect Man or Secrets in a Weird World. That's not to say that I'd often choose this one over those to spin in the car, but it's another strong vertebra in the spine of a band that really should have become one of the biggest in the entire genre...I mean compare their career to mega groups like Metallica or Megadeth that wound up taking huge dumps on their audience, and Rage looks a lot stronger overall even if their highlights aren't always as infallible as a Master of Puppets or Rust in Peace. The 18-year-old version of me might not have held much reverence for this record, but the middle-aged me thinks it certainly stayed the course, and its detail-woven anthems offer lots of thrills that would be anathema to other heavy, power and thrash metal acts of the time, some of which were dumbing down their sounds to fit that 90s zeitgeist. Plus, the "Fast as a Shark" cover was pretty smokin' and they did it before a lot of others.