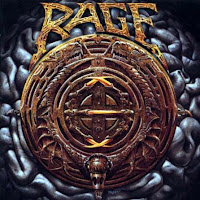 Black in Mind is many ways the ultimate '90s Rage album', cognizant of the decade which led to it, but embracing a bit more of a stripped down production and harder grooving sensibility than the previous albums, to keep it current with the heavier trends of its day. I'm not saying the band had set out to create the German proxy for A Vulgar Display of Power, but I wouldn't be at all surprised to learn that Peavy and company had sat down and felt the influence of efforts like that as they continued to modernize themselves out of the shrieking excesses of the 80s. The band does not exactly shy away from some faster material, but clearly that is not the focus when writing most of the tracks on this album. I think the places where this still resembles the earlier material the most is in the great lead-work and the distinctive Peavy Wagner vocals.

I have problems with it...the songs on this album are far better than the production, which continue to feel slightly off as it was on The Missing Link. It's the way the vocals are filtered into the mix, or a constant feel that there's an airy wisp or hiss somewhere in the interaction of the drums, guitars and vocals that just doesn't sound as clean as it was meant. Perhaps its my equipment, but I've compared a few of the different masters of this one and while some do well to spiff it up, I still get that nagging sensation, and it does curb some of my enjoyment of what is otherwise a strong Rage effort for a new era. Wagner's vocals are very restrained here, far more focused on angrier, raging verses in "Alive but Dead" or "The Crawling Chaos"; he even woofs out a few harsher barks on the precipice of guttural. He does throw out some higher and more melodic chorus vocals to rein this in, like in "Shadow Out of Time", but he definitely sounds pissed off and constipated through a lot of the run-time...never to the point of caricature, but it's just not my favorite performance. The riffs here are much more chugging and crunchy, not bereft of some dexterity or frenzied pacing like the title track, but just so measured, which actually helps the solos to shine more as they just stick out from the dingy undercurrent like glints of gold spotted in a stream.

Lots of horror-based lyrics, the band has often had a fascination with Lovecraft's cosmic horror and I don't feel as if they've ever gotten enough credit for that, but it certainly runs through this record like a black blood to its angry, beating heart, and of the half-dozen 90s 'classics' here: "Black in Mind", "The Crawling Chaos", "Alive but Dead", "Sent by the Devil", "Shadow Out of Time" and "In a Nameless Time", the theme is strongly represented. A couple other tracks like "The Icecold Hand of Destiny" and "Until I Die", with the latter's screaming, definitely have riffing motifs or overall vibes that remind me a lot of the band's masterworks from the latter half of the 80s, but these too are shaken a bit from the production values, which if I'm being honest, seem to be an issue for me more than others who were probably just getting into the band at the time. Black in Mind is yet another of the Germans' myriad works worthy of respect, and I admire how they were able to make the aesthetic, stylistic shifts of the time without abandoning their identity, but this is one I'd love to hear with a severe remastering unlike those we've already gotten, or even a re-recording. It's not the material itself, as is evident when you hear the live versions of some of these gems, which sound more vital.

I think if you ran them up against a number of their contemporaries of the time, they fared quite well. Of the 9 studio albums to its day, all were very good or better other than the piecemeal Ten Years in Rage. Peavy and his new lineup might have strayed further from their roots than Running Wild, who with Masquerade sounded like a more polished, seasoned version of the same thing (not complaining), but not nearly so much as the 90s Accept. It works though: solid riffs, structures, ideas that were fresh and not terribly derived from their own canon, some aggression, good lyrics. I just don't love how it sounds in my speakers, and the two and a half decades since haven't warmed me up to that aspect.

Posted by autothrall at 8:21 PM