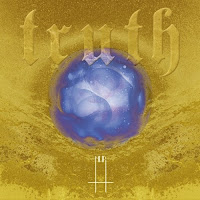 Mur is another of a number of French acts which combine the aesthetics of hardcore with black metal, or perhaps black-gaze, or post-black metal, or really the post-ness is created by this hybridization in the first place. This new Truth EP is an interesting one as the band has found a way to implement synthesizers into the mix which created an entirely other dimension of nostalgia. Their implementation is certainly redolent of the modern era of retro synth, so they're dirty pads you'd usually equate with film scores of the 80s, and the way they fluctuate between breaks in the aggressive metal instruments, or serve to complement them with even more chaotic, spastic tones is fairly fresh and gives this material more life than it might have without.

At the core, the band bowls you over with angry, raucous hardcore barking and faster, blasted beats, as well as the streaming, airy tremolo-picked guitars common to the post-black market, and that provides a nice foundation, but once they throw in those keyboards it gets much more choppy and melodic, and it's almost like the heavy heart of the band is a blunt instrument used to add a little weight to that sort of aggressive synthscape. It's not the only atmospheric trick up their sleeve...there's a passage in "Suicide Summer", for instance, where they let a distorted bass roil out and then layer in the keys to create this really warped, drugged out effect, and that's a brilliant song as it then erupts into the more arpeggiated synth-lines and roaring chorus vocals. The fact that the whole EP is pretty filthy and unwashed only makes it more interesting, they could have gone with a more polished vibe like the popular metalcore bands from the UK that mix in the keys (Architects, Bring Me the Horizon, etc), but I kind of like how it maintains this oppressive, discordant edge to it, interesting to explore.

At over 32 minutes this one feels more like a full-length than an EP. Of course, part of that is devoted to the explosive and crazy cover of Talk Talk's "Such a Shame", which works well within the medium that Mur has built itself, and might not even be too recognizable without the lyrics. There's also this giant 10 minute title track which is basically almost all retro-synthwave/krautrock, and I feel like it almost might have been a mistake to include, because I like it more than most of the band's more directly metallic fare. They still have some drums, guitars and intense sounds there, but it sounds like early M83 on a prog bender while ingesting as much acid as possible, and that's just cool. Overall, though, this is a cool permutation on the core sound they brought their 2019 album Brutalism, and a direction they could certainly improve a lot upon, maybe by ramping up the riff quality to compete more with the synth lines. But even as it stands, an interesting listen.