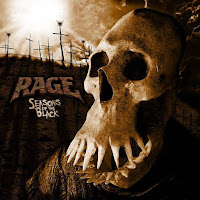 Seasons of the Black arrives about one year after The Devil Strikes Again, and it arrives blazing with some of Marco's most technical, impressive riffing that almost seems like a turn back towards some of the records on which Smolski had something to prove. The level of axemanship across the entirety of this album is indeed a little more flashy than its predecessor, but thankfully that doesn't hinder the quality or ever make it seem like he's running off with the songs, because the other members match it up with some tight skin-bashing and Peavy's maintaining of the more aggressive stance his vocals have had to take since his range has narrowed over the decades. The album has plenty of range, from whiplash-inducing power/speed metal tracks to more moderately paced, swagger metal anthems like "Blackened Karma".

They definitely go for some moody chorus structures, where Peavy does stretch his voice up a little and applies some decent backing tracks to give it the more choir-like effect you'll often hear from bands like Blind Guardian, only on the more subdued level. The mix throughout the record is fantastic, all of the little clinical details of Marco's playing are prominent without ever drowning out the more steadfast and workmanlike rhythm section, and I honestly think Wagner's vocals sound really pretty good in their more grimy and splatter-sounding pitch. Sometimes this comes at the cost of a few lyric lines sounding silly, like in the amusing "Septic Bite", but am I really going to complain about a band writing a tune about a fucking T-Rex? I think one other complaint I can lodge here is that the acoustic guitar parts sound really wimpy and not at all catchy, for instance the "Gaia" intro to 'The Tragedy of Man' suite which occupies tracks 8-11 here, it's just underwhelming; fortunately they compensate with a great melody to kick off "Justify" directly after that, one of the better tunes on the whole affair, which wouldn't have felt out of place on Reflections of a Shadow if Peavy had included a few higher screams.

Normally I don't glom onto bonus tracks all that much, but they've recorded five tracks here from Avenger's Prayer of Steel and I have to admit they sound quite good and offered a significant increase to the value of the album for me. Yes, Wagner can't sing quite like he did back then, but he gives it a go to make them sound like laudable modern adaptations, and musically they kick a lot of ass being sucked through the time-streams into a contemporary context. In fact, riff for riff I prefer these tunes to the new originals on Seasons of the Black, even if I might still reach for the original 1985 album if I was given a choice between the two. Some people won't care much about this, and be more interested in just the newer stuff, and that's certainly fair, but I just though their inclusion fleshed out the experience and made it more worth my time, rather than just doing a full re-recording album like a lot of bands try. Don't get me wrong, there's already a good 50 minutes of new material, they didn't HAVE to tack these on, but I'm happy they did.

All told, it's a solid nowadays Rage album on its own, especially when you consider they put it together in just about a year after the last; but that added 25 minutes kicks it just a little bit more squarely into the goal. The Peavy/Marco/Lucky lineup holds its own against the band's formidable three-piece rosters of the past, and if you've been a fan of their 90s era or beyond I think there are at least a few cuts you'll enjoy, and maybe also the celebratory introduction to their earlier era if that's new to you.