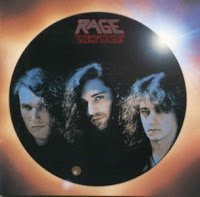 The song "Refuge" is a bit of a foreshadowing since that's the name Peavy Wagner would take on later to reunite with Manni Schmidt and Chris Efthimiadas, playing music which assumedly is in the direction of where they would have gone if Rage itself hadn't shifted its lineup. The title track is one of the finer pieces on The Missing Link, a riffy, perky and memorable update to their 80s style, although produced a bit dryly as I felt a number of their 90s albums were. However, that sterility doesn't bleed into the actual music so much, it's a track that at the time would be worthy of a single, which is more or less what this Japan-only EP represents. The remainder of the content on this is a trio of cover tracks; and if we're being real, that's the only reason anyone would have been tracking it down...with the remastered 2002 Noise reissue of the full-length Missing Link album, this is essentially useless, since the covers are ported over there.

But not so back in 1994, and what we're dealing with are serviceable if not trailblazing renditions that do their best to adapt the originals into the Rage canon. The Police's "Truth Hits Everybody" is turned into a punkier, driving force which is kept metal by Peavy's pitch, and though it's exceedingly simplistic I do dig the little lead flourishes Manni throws onto it. With "I Can't Control Myself", you get one of your favorite (or my favorite) Troggs' tunes beefed up, and I swear I'd heard this done before in a metal context but I'm not sure who by or if I'm just remembering this particular cover. Lastly, they offer up a classy choice of The Mission's "Beyond the Pale", something a lot more unexpected as it hails from one of my favorite English Gothic rock bands, a painfully underrated one. The German trio doesn't quite sink this one into the net quite as well, perhaps because it just isn't one they can crank up to their style and pace so much, but it does still convey a measure of the original's mood and at the very least I can appreciate their good taste. The bass sounds good, the soothing vocal harmonies, it's certainly a competent paean to The Mission's Children album, just wouldn't seem to be as fun to insert into a live set as the other two here.

Basically, here the Japanese fans and metal importers of the 90s were getting a bit of a treat that the rest of us plebeians wouldn't enjoy for a good chunk of the following decade, but if you did then it was probably pleasant enough to have, and it does add a little more value to the Missing Link remaster.

Posted by autothrall at 4:25 PM