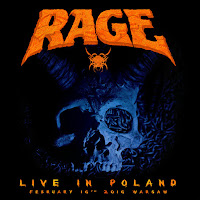 While this is far from a mandatory acquisition for any Rage fan, I think it's important to put Live in Poland into its proper context: this is, as far as I can find, a digital-only release taking from a few years prior, near the beginning of the Peavy/Marco/Lucky lineup and obviously some point before The Devil Strikes Again had dropped. The cover art is obviously a reference to that album, but other than "My Way", the advance single, this is a set culled from the band's earlier records like Black in Mind, Unity, and so forth. It could be forgiven as a bit of a warm-up for the trio, since they'd only been together for a matter of months and didn't quite have the history and confidence between them that they would later, or that Wagner would have had alongside a Mike Terrana and Victor Smolski. It's also released through Peavy's own Dr. Bones Lethal Recordings, which he was using to put out a bunch of re-released studio efforts, and really just meant as an added way to support the band for a couple dollars.

Having clarified that...it's not so good. Live in Poland has a fairly clean production, with an emphasis far more on the slickness of the instruments, and it lacks a lot of energy and crowd energy, even though you can hear some cheers and clapping around some of the tunes. It's not that the tunes are played without the proper competence, but they just seem to lack some vitality, especially harder hitters like "Down", and it almost feels as if its a rehearsal jam where the band's not going out of its way to get too crazy. Of course a lot of this is just due to the mixing and so forth, for all I know the show was utterly bonkers, but I don't feel like that translated so well onto the recording. Lastly, the vocals are a bit shaky and inconsistent, fine in some spots but in others, especially some chorus parts the delivery is just not Wagner's best. The drums sound pretty clear, and the guitars, the bass lines thud along but don't stand out that much, and things like keyboard samples are fine. Volume isn't so much an issue, and even the leads are pulled off effectively, but it all just doesn't come together as a kickass live experience like their 2004 double-album From the Cradle to the Stage: 20th Anniversary which certainly brought the goods.

The set choices are fine...I always think it's strange they don't include a lot more early material since for me that's by far the best period for the band, maybe Peavy is self-conscious about having a more limited vocal range, or the band is firmly stuck in the style they started to explore in the mid 90s, but at least they've got "Don't Fear the Winter". "Black in Mind", "End of All Days", "Back in Time", and "Down" are all pretty good staples. "My Way" also sounds decent, and it's probably the most accurate tune they've got here since it's one they'd written together for the upcoming album. Ultimately though this isn't a live experience I think many are going to turn towards over the studio output or the previous live album I mentioned, so it's kind of an uninspired dud, although not particularly terrible, and not really meant to be some huge production, maybe just a bonus for fans stuck at home in the COVID-verse.