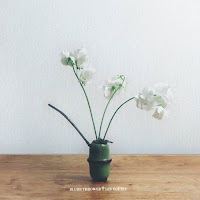 If you had told me 25 years ago that black metal album covers would be simple pictures of flowers like you'd see in any home/gardening rag, I'd probably have laughed at you. But it's a testament to the genre's ability to adapt itself into new aesthetic spaces which has helped it endure for me, and once we hit the pink-scape of Sunbather or the blooming fields of Bloem, there is really no turning back, and I'm alright with this. Now, don't get me wrong, I might not be a gatekeeper or purist of the form, but I love my spikes, leather and snow-capped mountains and pines as much as the next ice-demon, yet I love following the fundamentals of the music: haunting, melancholy, desperation, extremity and evil into new environments and a band like Blurr Thrower does just that.

On disc, they're picking up right where their 2018 EP Les avatars du vide left off, with some spacious, atmospheric black metal that hinges on both the traditional and post- fields. While the four tracks here have been truncated from the sprawling lengths of that release's two cuts, you're still looking at some largely swollen pieces, two of which cap the 12-minute mark. The actual style is unsurprisingly similar, with floods of fast-paced savagery that are dominated with sustained rasping and dissonant waves of higher-pitched melodic guitars that often captivate with a sort of post-punk, nearly droning mentality, although the overall effect here is one of warm light permeating your being, and doesn't come off as particularly hostile despite the genre in which the band plays. There isn't a large degree of variation in some of the riffs, they're sort of just flitting along on the same strings and tones, and unfortunately that makes the longer tracks here like "Cachot" a bit monotonous, with only occasional breaks in the action before the surging begins again.

That most of the tracks take on a similar pacing doesn't help, but to their credit, a few of the tunes manage to out-riff the others...for example, "Germes Vermeils" is a more passionate, hooky piece than "Cachot", and the wholly ambient short tune "Fanes" is a calming and welcoming interlude that does manage to get itself grimy in the final few moments where the sinister guitars and snarl break out. The vocals through the whole album are definitely of the suicidal old Varg variety, and that won't be to the taste of all, but I think they certainly fit to the music well enough. The drums are tinny and have a nice hiss to them which also matches the guitar tone, but really this is first and foremost about those guitar streams, the screams, and the atmosphere of the spaces between them, and that's the only trick to what Blurr Thrower are putting to tape. This is a decent follow-up when I'm in the mood, and if you do appreciate ambient/black metal shifts then it holds some appeal, but I think even in this limited, airy space the French project has risen to, there is some room for more variety in the future.