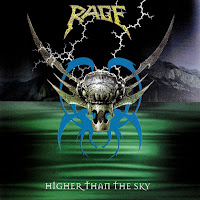 Another of the Japanese-only Rage rarities put out through Victor Records was this Higher Than the Sky EP, which was similar to Refuge in that it contained a pretty popular album track and then a couple of cover tunes. In this case, the covers were taken from a pair of tribute albums that the Germans contributed to for the respective artists, but they've also fattened this one up with a couple cuts that their fans in Japan might not have heard from other version of the Black in Mind album overseas. So there's an attempt at putting together some value here, like with a lot of Japanese releases, but as usual since this time there's been some other, massive remastered version where you can get all this material and a lot more, really dating this EP as a product. In this case it's the very recent Dr. Bones Lethal Recordings reissue of End of All Days with a TON of content added to it across two discs. I simply cover some of these EPs or maxis in their earlier incarnations because 1) I'm a scrub and only own the original full-length album without all the bells and whistles and 2) when I get to covering End of All Days I'll focus on that core album.

As natural as it is for a group like this one to tackle Iron Maiden and Judas Priest, it's almost too much of an obvious choice, especially for "The Trooper". When Rage is covering The Troggs or The Police they're making some level of transformation to those tunes which brings them more into the metal fold, and it's a little more interesting to hear. Their rendition of "The Trooper" is played very straight, and while entirely competent it's just as forgettable as so many other attempts at the original. On the other hand, the slightly beefier "Jawbreaker" has a real nice production to it, and it's cool to hear this one taken on with the rougher vocals....but everything here is awesome...the guitar tone, etc. Again, super loyal but quite well done for what it is...I'd actually listen to this version occasionally even if craving the Priest one. My first time hearing this EP was also my first exposure to the originals "Forgive But Don't Forget" and "Tie the Rope", the former a pretty plodding but dynamic track with a nice pre-chorus hook and riff that lead into an equally memorable chugged out chorus; the latter more energetic and pretty much thrashing along throughout, but somewhat mediocre.

The production on those bonus tracks isn't all that great, but it works, and certain instruments like when the wah wah comes in on the lead in "Tie the Rope" are pretty ace. Overall I can see why they wouldn't make the cut for a final album although they could compete with some of the weaker cuts on those mid 90s Rage efforts. All told though, Higher in the Sky is these days a collectors-only affair which the rest of us can just experience on a better product, but if you needed to pad out the years with the already prolific 90s Rage and throw more money then, like Refuge, this one used its space wisely. Apart from the "Jawbreaker" cover though there is nothing here I care that much to revisit.

Posted by autothrall at 5:37 PM