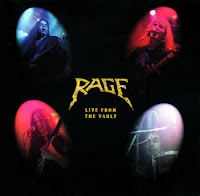 The third in my series of Victor Records import EPs from Rage, Live from the Vault is a fairly early example of a commercial performance gone to retail (in Japan), and it's honestly not so shabby despite the fact that it's a mere 30 minutes in length. This one's not going to give you the comprehensive experience that From the Cradle to the Stage would give years later, but as an example of them being able to put their fans' money where their mouths are, it will suffice. For a lot of Rage fans, these mid-90s were the peak of the band's powers, as they had strong support from records like Black in Mind and End of All Days, so it's not too surprising that this is the era of material which they are largely catering to, a bit of a bummer for me since I'm more into their 80s run, but ya gotta do what ya gotta do.

The energy is definitely there, the band chugging along through tracks like "Sent by the Devil" and "The Price of War", favorites of the era, but all of the melody and rock & roll pizazz is also clear through the guitars. It's not some perfect soundboard recording, so you might hear a lead being a bit subdued, or Peavy a little too loud here or there, but it does its job as a genuine performance, and the crowd really seems into it, jumping in on the chorus parts for "Higher Than the Sky". The bass and drums are fine, and Wagner's vocals are decent although we're already entering that phase in which he's only rarely screaming or pitching high, but he still sounds like that rough around the edges blue collar metal god that we all love.

I think it helps that they're in their native Germany in front of an audience that is most knowing of their material, but clearly their Japanese fans must be wild about them too considering all these collectible sorts of releases that hit the market, par for the course for 90s power metal. I do like all these songs, and the cover of "Motorbreath" is fun enough to close this set, although I can imagine this might have only been a partial set or something and you'd think they would close on one of their classic originals like "Don't Fear the Winter", "Waiting for the Moon" or "Time Waits for No One." Sometimes the band doesn't always put its best feet forward but again this is all a matter of opinion, and if you were desperate for a live recording after their first decade, this one is acceptable, if not necessarily worth the price of admission.

Posted by autothrall at 6:28 PM