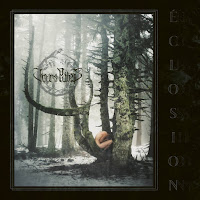 Jours Pâles is a new project from Aorlhac's Spellbound, and was born out of another group called Asphodèle, whose 2019 debut provided the new group's moniker. That was a tasteful, solid example of melancholic post-black metal, which has evolved here into something a little more distinct while keeping a few of the former's atmospheric traits. He's assembled an international lineup here including James Sloan of Uada, and Christian Larsson, who played with some depressive Swedish BM groups like Shining and Apati, and the resulting product is quite a professional and seasoned sounding effort which distinguishes itself from Spellbound's other bands in structure. This is more accessible than what I'm used to hearing from his material, but still bleak and moody enough to appease any naysayers to its more polished production.

A lot of the riffing patterns here remind me quite a lot of late 90s-early 00s direction taken by the Greek veterans Rotting Christ, with a series of flowing, simplistic riffs that weren't without some degree of bite, and the dreary, openness of the sound mixed with the sustained rasping is redolent of the way a lot of the Swedish bands like Tribulation, In Solitude or even Katatonia evolved their own sound into their last (or latest) forms. The riffs vary between the abovementioned, choppier rhythms and then some which are more of a barrage of driving power chords festooned in higher picked melodies, the latter of which is definitely from the Katatonia school. The bass has an excellent groove and tone to it through the album, and the drumming is also very good. They also use a lot of cleaner guitars as well as other atmospheric embellishments like somber keyboard tones to accent the heavier riffs, and the pacing throughout the album is predominantly a mid-paced surge which is most commonly associated with these very sad and emotive visions of harsher Gothic-tinged metal. That's not to say they won't pick up the thunder a little in the drumming once in awhile ("Suivant l'astre", etc), but just blasting away would betray the entire point of this sound.

There is a bit of a treat here within "Éclamé", which features soothing, ethereal female vocals and an escalation of synthesizers before just throttling you with the emotive growls and some of the more driving licks on the album, and in some other places they throw a few more evil or dissonant guitar phrases at you to keep you guessing and prevent the affair from becoming too tired or one-note. I do feel that there are a number of tunes here which start off quite promising, with a great selection of riffs, but then don't exactly capitalize on this once it comes to a chorus...so you arrive at just a measured, expected place instead of the more eloquent, melodic epiphany you might be hoping for, but in general Éclosion is just such a tightly realized debut that it's difficult to overlook the potential that seeps from every pore of its downtrodden, mournful sound. Certainly one that fans of Rapture, earlier 90s Katatonia and the heavier post-black metal acts will want to listen to for themselves, and Florian aka Spellbound has built up quite a personal discography, so if you like this you'll also want to track down the Asphodèle album, or maybe even the Medieval black metal of his mainstay Aorlhac, whose L'esprit des vents is fantastic.