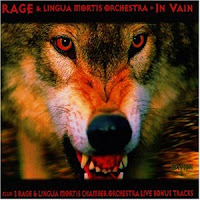 The In Vain EP is part follow-up to the 1996 Lingua Mortis album, which featured the Germans playing alongside the Symphonic Orchestra Prague, and it features for my money a slightly better integration of the metal instruments and the sweeping bombast and dark overtures that come with that territory. There are actually three different editions of this one featuring three track-lists, starting with this "In Vain" orchestra version, and then usually a couple of live originals complemented by a cover tune. Personally I found this a bit foolish when you consider that you could have compressed them all down for a release that was under an hour, but I guess they were trying to push some sort of collectivity, and when you consider how prolific Rage had been through the 80s and 90s I guess such collectors might've existed.

At any rate, the vocals are still a bit disappointing here...he's better in the mix against the strings, drums and horns, but he still seems to strain a little with the longer notes, and he's doing it at higher registers here which can get a little awkward. The orchestra itself simmers, turning a lot of the subtleties of the metal originals into these harsher, Wagnerian swell-ups, and even in the calmer moments of "In Vain" itself it does sound quite lovely. Similar to Lingua Mortis, this has somewhat more of a live feeling to it and it's not your super polished studio attempt, but that actually gives it an organic feel that I quite liked. The live material on some of these EPs actually sounds half-decent, with the band having fun as it storms through "Higher than the Sky" and its cover of Metallica's "Motorbreath". That said, none of this is really a draw unto itself on such a short-form release.

I didn't even care for some of the covers like the Stones' "Paint it, Black" which I'd just heard too many times by that point in the mid-90s to really care when it wasn't the original. Ultimately this entire idea and release were drivel...from the kind of dull picture of the wolf's face which is then filtered to a different color for the various versions of the EP, and the really limited content. If you just took this version of the title track, through on the rest of the live songs and covers into one recording, I'd still find it mediocre and there is little chance in hell I'd have paid to import all the copies. It seems like a lazy way to cop a couple bucks from the band's audience which were all far better spent on the Rage studio albums or much of the rest of the burgeoning European power/heavy metal scene of the 90s. Skip it.