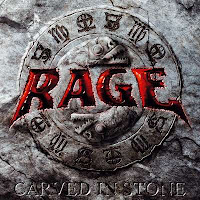 For its first few moments of keyboard orchestration accompanying the guitars, Carved in Stone comes across like a spiritual successor to the Ghosts album, and in truth I heard a few melodic nods to those tunes a number of times throughout the album. However, this is an effort much more steeped in the ever increasing guitar theatrics of the talented Mr. Victor Smolski, who manages to balance off his finesse fairly well with the songwriting, using his prowess with a lot of fills and busy rhythm licks that actually serve to make song progressions more interesting than they might have been if they were left more...plain. This is far from the most memorable of Rage's output, but it's a typically strong affair which does attempt a few new riff ideas. More importantly, while Peavy is not as his shrieking heights, he does have a decent sustain when he ups his pitch a little here...much of his performance is still the gritty, lower growl, but there's a breath of vitality erupting on certain songs that hints at an earnest youthfulness.

Musically this is still the lower-end driven sort of power metal that Rage had been performing since the 90s, with the slightly thrash/groove undertones in that occupy a lot of verse and bridge sections. The bass lines are thick and pounding, and there's a spirited, hard-hitting Hilgers performance, all of which makes for a great sandbox through which Smolski can just go wild. He keeps it well under control, don't get me wrong, but hurls a lot of fine squeals, harmonies and wailing micro-leads at us that are entertaining. I've said it before, but Victor is like the Ozzy guitarist that never was...he has the flash and technique of all of Osbourne's famed axemen (Rhoads, Lee, Wylde), all rolled up into one person with the added onus that he's got a more neo-classical shredder leaning to, and there just came a point in this band's career when he started OWNING the material. That's not to diminish the recognizable traits of Wagner's vocals and the fact that those two are as mighty a rhythm fusion as you're going to get, but it's always Smolki who is punching through the stratosphere and providing us with a 'new' feel to the material, very evident in a track like "Gentle Murders" where he lets loose with some wild patterns and a great self-dueling solo that is threaded with these technical little muted picked lines that are fantastic.

The band can certainly simplify, as it does with the slightly dumber groove metal of "Open My Grave", and these are probably my least favorite moments on Carved in Stone, although even this one does turn into a slightly dreamy, jazzy pre-chorus where it instantly improves. There are no tracks here which entirely lack for good moments...even the woozy acoustics that introduce "Without You" erupt into this blazing, groovy Sabbath-like rhythm and then just amazing guitar theatrics throughout. I know I keep coming back to it, but this is really an album which wouldn't suffer so much if I were simply watching Victor jam it all out in preparation at a rehearsal room; he's such an entertaining player and you never quite know where he's going next, even if you're familiar with his overall bag of tricks. If it stumbles, it never does for long, and the worst I can say for this one is that it blends in a lot with other recordings in their 21st century catalogue so that it doesn't really approach a landmark. But I dig most of it.

Posted by autothrall at 8:47 AM