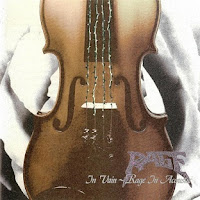 And because the three relatively useless versions of the In Vain EP were not enough, there was this fourth version, Rage in Acoustic, which was put out almost simultaneously through another imprint. This one does probably stand out if only because it does feature some genuine acoustic interpretations of the Germans' tracks, but I have to ask...was there really an audience who requested this, or was it just another component of Peavy spreading the band's wings as he did with the Lingua Mortis orchestra material? There was clearly an audience witnessing these live acoustic performances, I can assume by the clapping, and that's because these tracks are actually quite well done. In fact, I like the material here a little more than the live bonuses on the other In Vain EPs and perhaps even more than the Lingua Mortis album, but it's unfortunately scant.

The sound quality here is quite good, with the acoustic guitars and pianos just glittering in the mix...if it's really live, it was captured exquisitely. They'll add in a few swelling strings and such for drama, but the real treat here is how Wagner actually sounds great singing these. I know I've been critical of some of his performances on the older Lingua Mortis, but here he sounds like a minstrel plying his trade over a pretty sweet band of troubadours, and the trio of "Turn the Page", "Incomplete" and "Immortal Sin" definitely deliver on the promise of what a Rage acoustic outing should be. The cover of The Beatles' yesterday fits in well enough with the originals, but I don't know that I needed it and I think it's on one of the other In Vain EPs already, as is the title track. Far better would it have been had they just stretched this one out into a full-length of adaptations like the three in the middle, and then this would have been an excellent and surprising effort. As it stands, Rage in Acoustic certainly has more value than the other trilogy of releases in this series, and its proof positive they can pull this off, but it's too short to recommend hunting down.