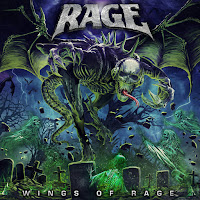 As a bit of a horror connoisseur myself, I can appreciate that some of the themes on Wings of Rage tip in that direction. The Stan Decker cover art is pretty awesome, maybe my favorite they'd used in a very long time, and I was fairly excited to the degree I was when Grave Digger had their album The Grave Digger based on the writings of Edgar Allen Poe. You'd expect the theming from more extreme metal genres like thrash, death and black metal, but the 80s were so heavily saturated with heavy metal bands covering the subject, and it stirs up such nostalgia, that I love it when more modern evolutions of that style revisit it. I've got my shelves stocked with CDs by Wolf, Powerwolf, THEM, and I'm happy to have Rage added to that crew...not that it's the band's first flirtation with that theme, but probably the most thorough.

Unfortunately, Wings of Rage just doesn't start off on the best footing, as the sort of silly narrative growling Peavy delivers throughout the opener "True" is a little awkward. The chorus does make up for that a little, with a good melody in it, but even that seems derivative of other tracks they've delivered in the past. There's a good lead in there, but the riffs aren't the most inspiring I've heard from Marco. This does improve elsewhere, with some more creativity on tunes like "Let Them Rest in Peace" or the slower, crawling "Wings of Rage" which has almost like a Wagnerian (haw haw) vibe to it from how the synths are placed behind the guitars. Overall, though, I found this was probably my least favorite in terms of guitars, of the three albums during the Marco Rodriguez 'tenure', because spoiler, this is to be his last studio album in the band. There's a solid EP's worth of material here to mark his passing, but I'd sooner turn a new listener towards Seasons of the Black or The Devil Strikes Again to check out his playing.

The production in general here isn't my favorite, in fact; it's all punchy and modern and sufficiently supports the slightly more theatrical feel to the songs with the keys and such, but in particular I just didn't love the vocals. He's flexing the same range as he has in the last 20 years, perhaps even scaling up just a bit higher on average, but there's just something in there that seems to lose the edge, or maybe 'bite' in this case, that he had on his lower range on other recent albums. He also seems like he's just on the brink of shifting off the intended key on a few lines. Maybe this was intentional but it just isn't his best, and that awkwardness becomes even more pronounced on the ballad "Shine a Light", which is a mediocre track to begin with, but throw his underwhelming performance on there and it's rubbish. I'm not a fan that ever needed Rage to write these sorts of tunes to begin with, it might have worked on Ghosts a few times, but that's fairly anomalous in their catalogue. The re-recording of "Higher than the Sky", titled "HTTS 2.0" on this album, is rather a dud as well. This album was mixed by the band itself, specifically Marco, and maybe that's part of the issue, but it's clear to me that the album looks better than it sounds, and other than a few tracks it's not one I've felt like spinning much since it dropped.