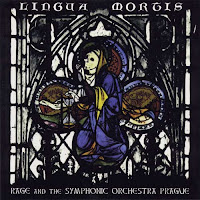 Though trips to the symphonic well would become more common in the band's later years, Lingua Mortis was kind of a novelty at its release in the 90s and marked a potential new direction for a band that was likely already looking for some new tricks. In fact, the very idea of hiring some orchestra musicians for a heavy metal studio recording alongside a band that was hardly a household name was pretty new in general. You had a handful of acts like Therion who were already exploring this ground, but for a longstanding power/speed metal act like this one it was fresh territory. However, considering that Rage already incorporated some violins, contrabass and cello on certain Black in Mind tracks the year prior, one would hardly consider it a surprise, more of a statement that 'this is happening' and the band wanted to explore this side of their influences without being dragged down by the 'metal first' component...

...and yet, the metal is still present, in a somewhat slovenly and subdued way, meaning that the bulk of it is just used to prop up some of the darkness and moodiness within these converted tracks. Lingua Mortis is somewhat of a raw recording, in that the band's core rock instruments and Wagner's vocals don't sound so seamless alongside the orchestration. The guitars for "In a Nameless Time", for example, are a bit rough if you're going into this with some expectation of high studio gloss, but if you're more interested in how it all comes across live, they're adequate. Wagner's vocals, while largely on point with the 90s studio output, can also get a little too grimy, especially when he's sustaining a lower, angrier tone, and there a couple lines where he almost seems to fall on his face. It's almost a shame that they didn't just keep the whole affair instrumental, maybe keep the guitars, bass and rock drums and have more of Peavy's vocals be interpreted by a choir, because where this works best is as an atmospheric, eerie overture of cuts like the aforementioned "In a Nameless Time" or "Alive but Dead", the latter of which just doesn't sound that great with him adding in the singing alongside the pianos and whatnot...it almost sounds like someone is playing the music on a tape recorder while the conductor does his thing.

One of the other centerpieces here is a "Medley" which includes snippets of tracks like "Black in Mind" and "Sent by the Devil", recorded similar to the previous tracks with the orchestra and band in check, and then around these are arranged little vignettes like a purely symphonic moment of "Don't Fear the Winter" or "Firestorm". This is a giant mess, I can understand the idea being that with a limited amount of budget they can't really get a lot of hits onto this, but I'd have rather they let one or two of those smaller bits be played out in full. Again, the idea of MERGING these two forms here just hasn't hit its peak potential and that really drags down the effort as a whole. I actually like the orchestra side of this one quite a lot, but then the quartet of Peavy, Seven, Spiros and Chris sort of steps in its own ambition and gets its boots muddied. Not a total write-off, of course, because this is a learning step for how they'd work rather well within the medium in the future, and eventually and briefly spin it off into its own entity, but this one remains a curiosity for me more than anything else.

Posted by autothrall at 9:27 AM