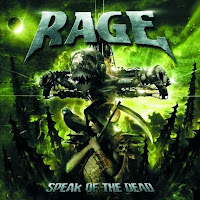 Speak of the Dead, Mike Terrana's final studio full-length within the ranks of Rage, is an album that comes with the up-front hurdle that is the "Suite Lingua Mortis", an 8-track metal orchestra. The trio once again explores those symphonic elements it has adopted through its 'Lingua Mortis' phase, which they would eventually spin off into its own project to return this core band back to the metals. Obviously a love for classical music, shared between Wagner and Smolski, was a huge part of why this had been welded onto the steel framework of the band's speed/power metal foundations, but I can't help but wonder if some bands were ultimately trying to emulate a little of the success that a group like the Trans-Siberian Orchestra achieved with its covers of Christmas carols, etc, after the dwindling returns of Savatage (who, for my money, in their 1983-1989 prime, were vastly superior to anything TSO has done).

At any rate, while the "Suite Lingua Mortis" is expertly produced, dramatic and well-scripted in terms of how it shifts between its classical moments and the harder metal bite, there was a very generic feel to it that ultimately turned me off a little and had me craving the more routinely metal content that occupies the latter half of this disc. I have no idea if Peavy is descended from THE Wagner, THAT Wagner, but a lot of the orchestral maneuvers remind me quite a lot of the old Valkyrie rider, if a bit more timid in their scope. Don't get me wrong, the conductor does a great job fusing it together, and in particular I laud the level-headedness of the production which reminds me of the Scorpion's great symphonic album Moment of Glory, but apart from a few cool Peavy vocal lines and guitar licks, this first 25-ish minutes of Speak of the Dead is just not that memorable unless I'm specifically in the mood for that sort of thing. Even Victor, for whom this style is bread and butter, sounds a little too constrained by what's going on with the strings, horns, and so forth, and thus his rhythms and chord selections are a bit dry, and the leads predictable and bland alongside the rest of the instrumentation.

Once we get to "No Fear", we get more into the Rage I wanna hear, and it just keeps getting better after that, with a couple of dirt-digging, heavier punching cuts that are still laden with the melodic affectations we had already heard through the earlier tunes. That's not to say this last batch of cuts are exemplary in their canon at large, but something like "Full Moon" or the title track finale is for me the highlight of the album rather than the classical suite. Terrana is a living storm on a number of these tracks, but even then it seems like they're holding him back a bit. Victor starts to flex his chops a lot more on this latter portion of the record, but he's not always coming up with the catchiest little bits as he does on some of the other albums during his tenure. Peavy still has a little range and he really thrives in the mid-highs but non-screaming zone, especially when he's got some decent backing vocals. All told, Speak of the Dead is an effort I remember liking a lot more when it arrived, but the years haven't been drawing me back to it other than a couple of the heavier tunes. It's solid, fairly ambitious, and I certainly wouldn't ask someone to shut it off if we were listening to it on a drive, but just doesn't offer me a lot of what Rage hadn't and hasn't done better elsewhere.

Posted by autothrall at 9:13 AM