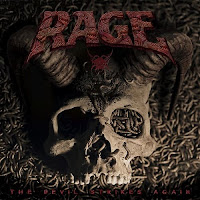 Although the advance track "My Way" hardly struck gold with me, I was pleasantly surprised to discover that The Devil Strikes Again is just a down to earth, honest heavy metal album, going for a certain level of grit and aggression which not have been novel in the band's already lengthy history, but is performed with an amount of 'no fucks given' here that I rather admired. I think this is one of the better Rage albums in terms of how it balances Peavy's more restrained mid-range vocals with the meaty, heavier music. There are still plenty of Euro-anthem based progressions throughout a number of the tunes, but they all feel really grounded and never biting off too much more than they could chew, which might have been an issue if you weren't into Smolski's high flying theatrics on some of his later albums within the fold.

Marco and Lucky ably prove themselves here, the former with his capable riff set and great leads, the latter with an even more driving performance than what I expected from the My Way EP. Most of the tracks have a formidable balance of power and catchiness, and cuts like "Back on Track", "The Final Curtain" or "Ocean Full of Tears" recall the 90s Rage which is a favorite for many in their audience, while dipping some tendrils even further in the past. For example, I can even hear a few direct traces of the 80s material so beloved to me on Perfect Man or Secrets in a Weird World. Granted, Peavy's almost gone monotonous with his delivery...but for the same reason I love Lemmy, a super-limited front man, I've grown to appreciate the level of passion this guy puts into each line, even when he can't give me the age-old shrieking I crave from his yesteryears. The choruses are still well-built, and he layers into the backing vocals perfectly. I also love the little flashes of the speedy old Rage in "Spirits of the Night", and they even throw out a few tunes that take me completely by surprise like "The Dark Side of the Sun", with that amazing opening riff section which almost felt like Golden Age Artillery...thundering, melodic semi technical power/thrash metal!

More of that, please. Granted, the album is nowhere near as heavy as it looks...the skull and maggots crawling about on the cover? The title? Nah, but much more than the last 5-6 albums before it, The Devil Strikes Again sounds like a band reining itself in to create a consistent experience that marries the thrash, speed and power metal influences that defined their earlier eras. The only piece here that I feel I can skip over is "My Way", and that's hardly a terrible track, it just doesn't have those great hooks waiting for me around the corner like its neighbors. Once more we've got a German power trio which can live up to its name, and if this is only the first foray for these three...what'll the future hold?

Posted by autothrall at 6:02 PM