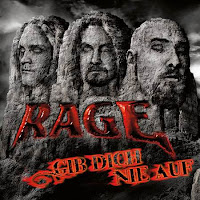 Gib dich nie auf (aka "Never Give Up") is a little enhanced EP of some odds and ends, largely consisting of material from when André Hilgers had taken over the drums from Mike Terrana. The image of the Rage trio as a sort of metal Mount Rushmore is a bit goofy, but then again it wouldn't be of much benefit to put more work into a release that seems hastily thrown together in a year between two full-length efforts, Carved in Stone and Strings to a Web. These sorts of things are usually more miss than hit, and this one isn't much to write home about, but there are a couple rarities on here that you may or may not have had exposure to depending on which versions of their albums you bought or listened to, since they've long been one of those bands of importance to which their labels ascribe a bit of an assembly line productivity.

"Never Surrender" and the titular "Gib dich nie auf" are the same track in two languages, and for some reason I've just always preferred my actual power and heavy metal in English. Don't get me wrong, I don't share the aversion to the harsh German tongue as many others, in fact I find it kind of sexy, but just not with these particular forms of metal. Anyway this one's a bit of a rager, with some flashy licks that almost remind me of some of Ozzy's guitarists, especially Zakk Wylde, and it definitely catches the attention with a solid shift from the verses to a simpler, more epic chorus. "Vollmond" is the other German number here, originally released as "Full Moon" on an earlier album with Terrana on drums. Once again, I highly recommend the English version, it's another solid track. These are joined by "Terrified", the band's contribution to the Nuclear Blast compilation Into the Light, which I don't have...and don't really want if this is an example. The chuggy parts are a bit boring and the whole thing feels a little muddy, although not entirely void of that Rage personality with the vocals/chorus.

Add to that the orchestral edition of "Lord of the Flies" from Carved in Stone, which doesn't do much for me...I mean it works, but I find myself drawn more to the core metallic elements of the band, except maybe the bridge which gets a magical vibe with some sparser percussion and less intrusive strings. "Home" is a piece from one of Smolski's solo records, but I guess with Wagner's vocals added. It's a symphonic tune with some tasty little acoustic guitars that transform into some leads...ends up a lot less goofy that it seems like it's going to be. The video components are just as scattershot, from a live version of "Refuge" at Wacken to a Smolski guitar seminar...really, the whole thing feels like it's just hashed together to assemble some sort of coherent product...and it's not terribly worthwhile save for "Never Surrender". Maybe if you can get this in the little box set with Carved in Stone it's a decent bonus, but on its own it's not too inspiring.

Posted by autothrall at 8:44 PM