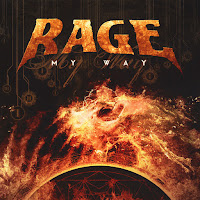 The My Way Ep was released early in 2016 as both an advanced single for The Devil Strikes Again, and a presumed 'warmup' for Peavy's new power trio lineup with newcomers Marco Rodriguez and Vassilios Maniatopoulos. In a way it could be seen as a rebuilding of the band, not that Wagner has ever had much trouble choosing the right replacements for his roster but it can't always be easy to find that cohesion. This is one area in which I can say that the material here is a success, because the three play together seamlessly, so that it doesn't feel as if a beat had even been skipped. In particular I liked Marco's lead guitars, he's obviously not as maniacally gifted as Victor Smolki but he's got some chops and he executes his solos well so that they're often the most standout parts of the songs he's performing on. Drummer 'Lucky' is also pretty damn solid, maybe a bit more organic sounding with his rhythmic hammering than his last few predecessors.

So the lineup works, but the material on this EP leaves a lot to be desired. "My Way" is quite bland for a single, sounding a lot like the band's 90s material circa Black in Mind, but just not that memorable in terms of riff choices or chorus vocals. The first heavy guitar rhythm in the pre-verse sounds a lot like a sped up "For Whom the Bell Tolls" and I found that distracted, and while it seems like it's really going to pick up with the little acoustic segues and the more melodic chords it just doesn't ever hit a climactic point like so many of their earlier songs used to. This is also available in Spanish on the butt end of the EP, "Apuesto a Ganar", which isn't that unusual since Rage often includes non-English tracks on a lot of their short releases and bonus material, they've always cultivated a pretty international appeal. This might even sound better with the Spanish lyrics but it's just not enough to save the song from being rather average.

Rounding out the release, of course we've got to have some re-recordings of classic tracks with the new lineup. Both of these are from 1995's Black in Mind, which does make some sense since that's the sound they'd really be shooting for on The Devil Strikes Again. Neither of them really excels past the original incarnation. Perhaps they have a little more force behind them, which is easy to do when you've got the old version to compete with, but as more than a curiosity as to how the new lineup will sound in the live setting (competent, for sure), they don't have any value for me. I am well versed in the titular "Black in Mind" but "Sent by the Devil" was one I'd forgotten about, although it's not a bad tune either. For overall value this one just doesn't offer much, you can get "My Way" on the ensuing album, and unless you REALLY want to experience those re-recordings in a studio with this particular lineup, they don't offer anything too exciting beyond the knowledge that, hey, these new guys can play those old songs. It just doesn't inspire a lot of confidence in me when the actual NEW track is so average.

Posted by autothrall at 5:20 PM