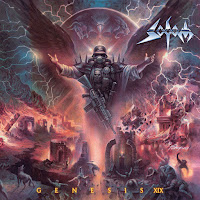 Sodom has, for many years, flirted with its own origins, whether that's in re-recording or re-releasing early tracks or injecting some nostalgia into its more modern, slicker productions. However, I think it's their latest offering Genesis XIX which is the most legitimate attempt at making a record that might have existed between their rough earlier material like In the Sign of Evil and Obsessed by Cruelty and then their first attempts at real thrashing structure like Persecution Mania. Granted that there is a bit of production and musical evolution present on this album that does seem slightly like something a veteran thrash act might release in the year 2020, but had this been mixed a little rawer than what Siggi Bemm and Toni Merkel ultimately came up with, it would feel like it totally belonged to that 1986-87 period.

I wouldn't deign to dub the tracks 'simple', but they are all quite straightforward and cutthroat, going for that feeling of the archaic Teutonic anthem, of which they once contributed many. If you dug staples like "Sodomy and Lust", "Agent Orange" or "Nuclear Winter", this is really the effect that so many of the cuts are going for. The riffs are never more complex than needed, but still hustled and sinister and sometimes exhibiting the speed of those early Sodom or Kreator discs like Persecution Mania or Pleasure to Kill. The leads are whipping ribbons of evil and atonal noodling that meld perfectly over the frenetic rhythm guitar riffs, and the drum and bass are just an incessant, belligerent, focused force. That said, the real star of this show is Tom Angelripper's throat, sounding just as nasty and torn as it ever did in the 80s, in fact I'll go out on a limb and say this might even be better. Perfectly placed phrasing, just enough reverb or effects in the mix to create that psychotic payback that the best thrash requires by mandate, and the guy brings more threat than much more energetic vocalists half his age in this genre.

There's nothing here by way of a surprise, and I think it might be held back slightly by a number of riff patterns that are kind of common within the Sodom canon, but ONLY if you're the sort of fan who wants them to build upon their considerable legacy, to somehow evolve. If you've been long awaiting a proper return to the roots, and were always content with those first 3-4 discs before the slightly more death metal and punk phases they explored, then this is a bullet-belted, spiked, radiation-masked Godsend. I can completely sympathize with the praise being lavished upon it, even if I might not prop it up on quite that high of a pedestal myself. It's clearly the best emulation of their formative, breakout years, and one of the best albums they've released since the 80s, but then again I had no problem with the slighty beefier, more dynamic, modern sounds of Decision Day from 2016. The intentions aren't all that disparate, but Genesis XIX just goes for the nastier, earlier strategy while its predecessor was a little bit more of matured, brute force. Good album, decent lyrics (in spite of "Glock 'n 'roll"), awesome cover artwork from the legendary Joe Petagno.

Posted by autothrall at 4:55 PM