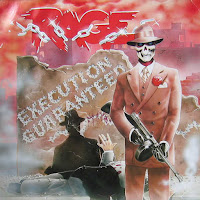 Nearly synonymous in quality with its predecessor, Execution Guaranteed expands upon the creative riffing and quirky ideas at the expensive of maybe going a bit over the top in just a few sections. Just not enough to mar the experience, because like Reign of Fear or all their other output in the 80s, this is an album which feels as fresh and 'new' to me in 2021 as it did when I was a teenager. Perhaps it's because there simply aren't any other bands to come along which have sounded to me quite like what Peavy accomplished, and this thing is just loaded with riffs to fucking die for, still straddling the borders between power and speed and thrash metal, heavy hitting but laden will plenty of melody and finesse. Perhaps it's also that awesome if cheesy cover art with a skeletal gangster, strapped with a tommy gun, and it's kind of the swan song before the band would implement its awesome 'Soundchaser' mascot.

There was one lineup change here, Rudy Graf stepping into the second guitar spot, but even though they're still not in what I'd consider the ultimate Rage formation, I have few if any complaints about any of the musicianship. Swarthy, heavy guitar tones, power drumming, well executed, varied leads, and Wagner's steady bass lines, which are felt slightly less than on the debut. There are a few spots where the snare drum seems a bit too tinny or clappy, but it's a minor gripe when everything else sounds so loud and fantastic. As with the prior album the band has no quips about adding in some keyboards or effects like in the middle of "Deadly Error", or the video game samples that open "Mental Decay", they add a lot of personality. The riffs are all over the place from the tasteful melodic speed metal flurries that would heavily characterize their following two albums, or the crisp low-end chugging which is anything but generic. While Wagner's vocals aren't far from Reign of Fear, I do feel there is a bit more focus on their production which can occasionally make them stand out...he's got such a unique personality between the higher pitched screams and howls and the more gritty mid-range, and it does take some getting used to...but fuck, so doesn't King Diamond.

Nobody can fault his chorus lines, though, delivered amazingly on thundering anthems like "Before the Storm" or the immortally catchy "Hatred", which also features some workmanlike heavy/thrash riffs that remind me of Testament's The Ritual, only five years earlier! They've really mastered the art of the slower track, too, whereas "The Scaffold" bonus track left something to be desired on the debut, "Streetwolf" has no such problems, an atmospheric masterpiece that winds up to the escalating scream of the title with some eerie, clinical muted melodies. You can just imagine walking the misty concrete jungle apocalypse of a fictional, dystopian 80s action movie with this one playing in the background. But in every instance the band is hustling, from the scathing opener "Down by Law" to the finale "When You are Dead" this is also one fun-as-fuck, rousing record that is never far from my mind when I'm appreciating all those unsung Noise Records classics. The cherry on top is that they would keep on getting better...