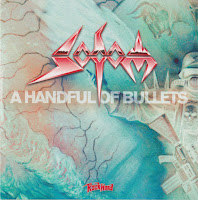 A Handful of Bullets is another example of a German thrash act putting out an exclusive CD strictly through the publication of a European magazine, throwing together a few odds and ends for fans and readers. It also happens to be a pretty cool one, because Sodom and Rock Hard have seen to it that the material here is not something you're going to exactly find elsewhere in the same form. In addition to a couple tracks, there are remixes and a remaster here which not only do justice to the original or 'main' mixes, but in my opinion even surpass them. This is especially true of "Sodom & Gomorrah" and "Indoctrination", which just seem to have a more even balance of evil, crisp guitars and the diabolic vocal snarling that Tom achieved in one of his nastiest performances of the whole discography. They're not exactly a far cry from what you'll find over on Genesis XIX, but I responded even more favorably to these than the versions chosen for the broader release of the full-length.

There's a cover of Venom's "Leave Me in Hell" which is quite nice, playing pretty close to the belt in terms of the guitars and drums, but once again Angelripper's vocals tip the scales, they sound really awesome with that sort of distanced or reverbed effect on them, it just makes the whole tune evolve from its dirty roots into something somehow more menacing and potent. What fans will REALLY be pining for here is the non-album track "Along the Path to Hades", a peppy thrasher with a bit of a feel of their records like Agent Orange or Persecution Mania, and I'm honestly a little surprised they held this one off the full-length, it's quite damn good. Rounding the EP off is another remixed tune from Genesis XIX, "The Harpooneer", and no surprise...also sounds good. I imagine the mix to these tunes isn't going to be for everyone, it's definitely just a few knobs twisted, but in its own way it feels just as 80s as the album and I just had a blast listening through it all.

The value here is limited a bit by its rarity and the fact that 60% of the material can be found on the release the fans are much more likely to track down, but I have to give some credit that they put together an entertaining and ear-pleasing 22 minutes of content that will certainly be a boon for those who subscribe the magazine and undoubtedly already dig the legendary group. I'd actually place this above most of their other EPs in quality even when those including more unique, unreleased cuts.

Posted by autothrall at 4:57 PM